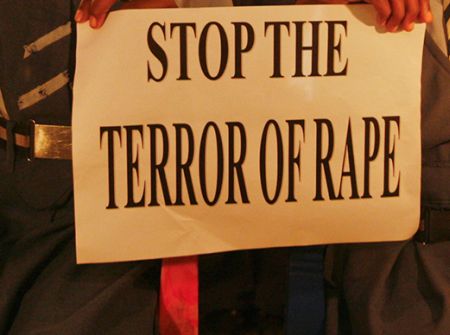 Three accused in the Bulandshahr gang rape case were on Monday sent to judicial custody, even as Governor Ram Naik expressed anguish, saying cases like this have been occurring at different places and there was need to halt recurrence of such incidents.

Uttar Pradesh Police had on Sunday arrested the three accused -- Naresh (25), Bablu (22) and Rais (28) -- and detained a dozen others after launching a massive hunt for a gang of dacoits suspected to be behind the highway crime.

"The trio have been remanded in judicial custody for 14 days by a Bulandshahr court," IG (Law and Order) Hare Ram Sharma told reporters in Lucknow.

Gold ornaments of the victims and Rs 5,500 cash were recovered from the accused, he said, adding a request would be made for trial by a fast-track court.

Efforts will be made to file the charge sheet within three months, he said.

Seven to eight more names have come up and the police have constituted six teams to nab them, Sharma said.

As the Samajwadi Party government faced fresh flak from opposition parties over the "deteriorating" law and order in the state where Assembly polls are barely a few months away, the Governor voiced his anguish over the incident and asked the state government and the police to take immediate steps to ensure that such cases did not recur.

"The state government and the police need to follow their duties in ensuring that such incidents do not take place in the state," he said on the sidelines of a programme here.

"This is not the first incident...Cases like these have been taking place at different places...There is a need to work to ensure safety to all," Naik said, adding immediate steps are needed in this regard.

The Governor, however, expressed satisfaction with the steps taken by Chief Minister Akhilesh Yadav in rushing senior officials like the DGP of the state police and principal secretary (home) to the scene of the crime.

Special directives have been issued by the government to intensify highway patrolling so that such crimes did not take place again, Sharma said.

The state government, meanwhile, posted PAC Commandant Anees Ahmad Ansari as the new SSP of Bulandshahr following suspension of Vaibhav Krishna after the gang rape of a woman and her teenage daughter by bandits on Friday night.

Bawariya gang members had brutally gangraped the woman and her 13-year-old daughter on gunpoint after dragging them out of a car in Bulandshahr on NH-91 when they were travelling with their family from Noida to Shahjahanpur.

The matter had an echo in Lok Sabha where BJP members hit out at the UP government over the law and order situation and demanded resignation of the chief minister.

Raising the issue during Zero Hour, Bhola Singh, who represents Bulandshahr, alleged that such incidents were happening in the state as criminals enjoyed the government's "protection".

"The police are not able to work. The situation in the state is very serious. The chief minister should resign," he said, drawing support from other party members, one of whom said, "Uttar Pradesh is burning."

Members of the Samajwadi Party, which is in power in the state, were seen protesting, with Dharmendra Yadav heard asking the treasury benches to get Prime Minister Narendra Modi's resignation first.

BSP supremo Mayawati demanded resignation of the chief minister on moral grounds, saying there was complete 'jungle raj' in the state and criminal elements were roaming freely.

"The SP government and its head must tell the people if they can return the modesty of women in such a painful and heinous crime," she told reporters in Delhi.

Meanwhile, the National Commission for Women summoned a doctor who conducted medical examination of the minor victim, for allegedly ill-treating her and asking "awkward" questions and also slammed the police for not including sections of POCSO Act in the FIR.

NCW Chairperson Lalitha Kumarmangalam said the family had told the NCW team, which met the victims in Bulandshahr, that when the girl was taken for a medical examination, "she was abused by the doctor, who asked her a number of awkward questions and berated her".

DIG Meerut Range Laxmi Singh said that POCSO Act has not yet been added in the FIR.