Hundreds of tractors bedecked with lights and posters rolled through the Singhu border protest site as loud Punjabi and Haryanvi songs filled the air on Friday to mark one year of the protest against the three farm laws that the government is set to formally withdraw. 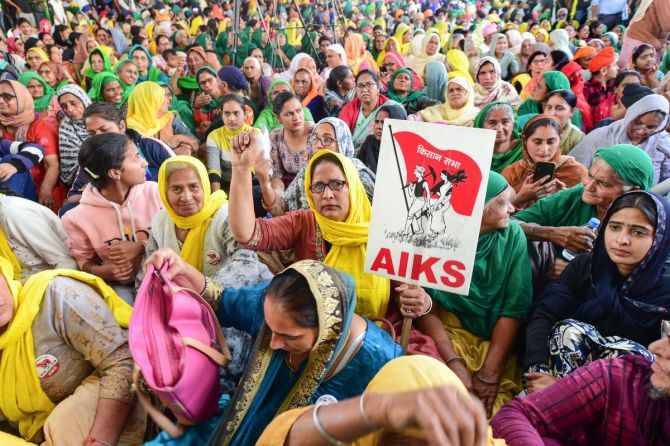 IMAGE: Farmers from Punjab and Haryana gather at Singhu border to mark the first anniversary of their agitation, in New Delhi, on Friday, November 26, 2021. Photograph: Kamal Kishore/PTI Photo

Farmers flaunting colourful turbans, sunshades, long beards and twirling moustaches danced on tractors, distributed sweets and hugged each other to mark the occasion that seemed like a festival.

Thousands of them have flocked to the site over the last few days, buoyed by the government's announcement to repeal the farms laws, to mark the completion of one year of a dogged protest that saw a long dusty patch of the Delhi-Karnal road between Delhi and Sonepat turn into a makeshift town with bamboo huts and all the basic amenities one could think of.

Children and elderly, men and women, carried flags of their farmer unions and raised slogans of victory 'Inquilab Zindabad' and 'Mazdoor Kisan Ekta Zindabad' amid passionate non-stop beating of drums.

The assembly area near the centrestage saw a large gathering resembling the early days of the protest.

The attendees included businessmen, lawyers and teachers among others, who belonged to families of farmers.

Sarender Singh, 50, from Patiala, who has spent six months at the protest site managing crowd near the centrestage, said, "It's a special day. It's like a festival. It's after long that such a large number of people have gathered here."

On Friday morning, farmers held special prayers to pay tributes to those who died during the course of the protest.

Lakhan Singh, 45, from Barnala in Punjab was protesting against the farm laws at the Delhi-Haryana border when he lost his father early this year.

"It would have been better had he been here today. But I know his soul will be at peace now," Lakhan said.

Bhagwan Singh, 43, from Mavi village in Patiala lost his friend Najar Singh, 35, in the seventh month of the protest and burst into tears remembering him.

"My friend, the sole breadwinner of his family, left behind three small daughters and elderly parents. We miss him," he said.

Farmers remembered how they walked and cycled for days to reach the site of the protest a year ago and kept the fire burning despite the government 'trying to scuttle the movement'.

Kirpal Singh, 57, who reached the Singhu border December last year, showed an injury mark on his right leg he got from police baton.

"Batons, barricades, treats, nails... nothing could stop us. We won!" he said.

At Ghazipur on the Delhi-Uttar Pradesh border, hundreds of farmers in tractors arrived to mark one year of the protest.

Many of them brought along vegetables, sacks of flour and lentils, spices and cooking oil on their tractor-trollies, saying they have come prepared for a long haul.

Bhartiya Kisan Union (BKU), an influential farmers' union from western Uttar Pradesh, has been leading the charge at the Ghazipur border since November last year.

The BKU is part of the Samyukta Kisan Morcha (SKM), a farmers' collective, which is spearheading the protest for withdrawal of three contentious farm laws and for legal guarantee on minimum support price (MSP) of crops.

'It has been a year of unmatched struggle mixed with happiness and sadness. We are fighting and winning. We will fight and win. MSP law is farmers' right,' BKU national spokesperson Rakesh Tikait tweeted in Hindi.

The outfit's office-bearers claimed the police have been strengthening the barricading at Ghazipur border -- both on the Delhi-Meerut elevated highway patch and at the UP Gate down below it -- since Thursday, even as they said the crowd would swell at the protest site by evening Friday.

"We have a meeting of the SKM on Saturday and the future course of our action will be decided only after that.

"We have planned a march towards Delhi on November 29, but SKM will take a call about it on Saturday," BKU spokesperson Saurabh Upadhyay said.

He said, "Supporters in large numbers started reaching the border early Friday morning and by evening we are expecting over 50,000 people at Ghazipur alone."

A BKU supporter who reached Ghazipur in the morning from Muzaffarnagar on a tractor in a group said they have come to the protest with arrangements for food and accommodation.

"It has been a year, the farmers can continue the protest for their rights for several years," the villager, draped in a shawl and a muffler, said.