Tens of thousands of farmers gathered in Muzaffarnagar town on Friday to attend a mahapanchayat in support of the Bharatiya Kisan Union-led protest against the Centre's new farm laws in Ghazipur on the Delhi-Uttar Pradesh border. 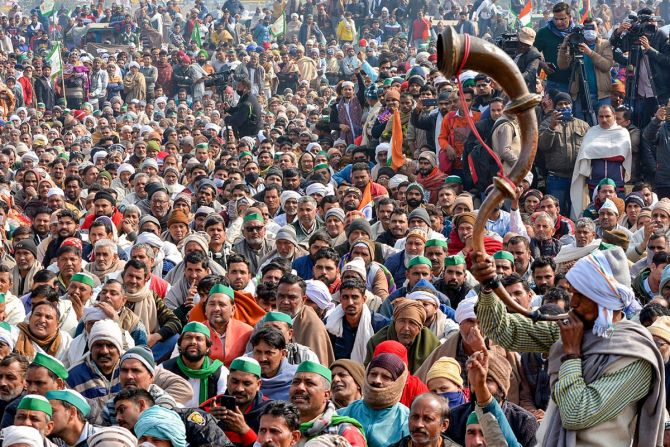 A day after BKU leader Rakesh Tikait broke down at Ghazipur and tension spiralled amid fears that the farmers who had been camping there for two months would be forcibly removed by the local administration, all roads in western Uttar Pradesh it seemed led to Muzaffarnagar.

His emotive plea, which was captured by television cameras and other media and was widely circulated, seemed to have propelled the crowd to head to the protest site at the UP Gate in Ghazipur and boost the numbers there.

The mahapanchayat resolved to throw its full weight behind the Ghazipur protest.

Rakesh Tikait's brother Naresh Tikait, who had called the mahapanchayat after Thursday's developments at Ghazipur, told the charged crowd to move towards the Delhi border, about 100 km away.

Given perhaps the chaos on Republic Day, when a section of farmers taking part in the tractor parade broke through barriers and clashed with police, he stressed that they should go peacefully and proceed in small groups rather than big ones.

The GIC ground near Mahaveer Chowk was packed, a sea of people congregating to back the protesters at UP Gate in Ghazipur.

Hundreds of tractors with the tricolour and flags of farm unions were parked along city roads, disrupting traffic movement.

The GIC ground was the centrestage and scores of regional farmer leaders took the mike to back the protesters at the UP Gate in Ghazipur.

As Muzaffarnagar became the meeting point for farmers from across the region, Rashtriya Lok Dal chief Ajit Singh also announced support for the BKU and his son, party leader Jayant Chaudhary, participated in the mahapanchayat too.

"Lathi se desh nahi chal sakta, sarkar ka ek iqbal hota hai jo isne kho diya hai (The country cannot be run by the use of force. The government has a prestige, which it has lost today)," Chaudhary told reporters on the sidelines of the event.

Asked why he joined the mahapanchayat of farmers, Chaudhary said, "My family has a history. Chaudhary Charan Singh (former prime minister and his grandfather) worked for farmers who are now facing trouble.

"And it's the responsibility of all of us to come together to support farmers in this difficult time."

'It is a matter of life and death for farmers, but do not worry. All have to stay together, united in this -- this is Chaudhary saahab's (Ajit Singh's) message,' the RLD vice president said in a tweet in Hindi.

Aam Aadmi Party MP Sanjay Singh, who had ink thrown on him in Hathras a few months ago when he was leading a party delegation to the village of the Dalit woman who died after being allegedly gangraped, was there as well.

"The ink that was thrown at me, will be used to write (Prime Minister Narendra) Modi's history," he told the gathering of thousands.

Members of the group have been protesting at Ghazipur for more than two months to demand a rollback of the contentious farm laws brought by the Centre in September last year.

The RLD, which was virtually wiped out in the last Uttar Pradesh Assembly polls, was founded by Singh, son of former prime minister and farmer leader Chaudhary Charan Singh.

The mahapanchayat was called by BKU national president Naresh Tikait over the developments in Ghazipur.