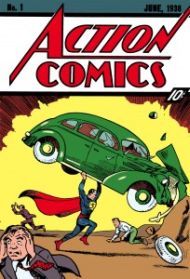 A rare copy of Action Comics #1 that introduced Earth to Superman has become the world's most expensive comic book, selling for a whopping $3.2 million.

The 1938 book in which the superhero first appeared initially cost 10 cents. When Darren Adams decided to put his incredibly rare, nearly pristine copy of the debut issue of the Man of Steel up for auction on eBay, he generously started the bid at 99 cents.

Less than two hours later, the price had risen faster than a speeding bullet, past $1.5 million. When the auction ended on Sunday night, the owner of Pristine Comics in Federal Way, Washington, discovered that his holy grail of comics had scored him $3,207,852.

Adams' 1938 issue was labeled as having "perfect white pages" and given a condition rating of 9.0 by the comic grading service Certified Guaranty Company.

No other copies of Action Comics #1 have been graded higher and only one other has ever received a 9.0, according to it's eBay description. There are only around 50-100 original copies believed to still be in existence, the New York Post reported.

The multi-million-dollar issue topped another Action Comics #1, previously owned by actor and avid Superman fan Nicolas Cage, which sold in 2011 for $2.16 million.

Adams will be taking a page out of the Metropolis Marvel's playbook and plans to donate 1 per cent of his proceeds to the Christopher & Dana Reeve Foundation, which is dedicated to helping the treatment and research of spinal-cord injuries and paralysis.

Christopher Reeve famous played Superman in the 1970s and '80s.

"The idea of sitting at $2-million was never really a risk in my mind," Adams said. "Too many people have such an interest in this book." "I actually held it for a few years -- I was so excited about this book. Most books have a history...but this book was totally off the grid, and nobody knew about it till I made it known," he added.

Adams's copy was particularly well preserved because the original owner kept it in a cedar chest at high altitude in the mountains of West Virginia after purchasing it from a newsstand in 1938. It remained there until he died, and was later sold to Adams for a seven-figure sum.

Superman was created in 1933 by two Cleveland teenagers, Jerry Siegel and Joe Shuster, but they sold the rights to DC Comics for just $130, receiving $10 for each page they drew.