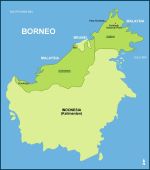 Malaysian security forces gunned down 32 Filipino intruders in Borneo, bringing the death toll in the three-week long standoff to 60, after armed followers of a self-proclaimed Filipino Muslim Sultan took over an entire village in Sabah province.

Hours before the assault, Malaysian Prime Minister Najib Tun Razak said Sulu militants must lay down arms and surrender unconditionally and operations against them "will go on as long as it takes", rejecting the cease-fire call by Sulu Sultan Jamalul Kiram.

Assuring the people of Sabah of safety, Razak said that the question of whether the province of Sabah was part of Malaysia should not arise as that has been determined legally as far back as 1878 and subsequently by the referendum conducted by the Cobbold Commission ahead of the formation of Malaysia.

"Do not underestimate Malaysia's determination to maintain Sabah as part of Malaysia," he said.

"As of now the death toll among the Sulu intruders stands at 52. At this point of time no further information can be given," Inspector-General of Police, Ismail Omar was quoted as telling reporters in Lahad Datu, capital of Sabah state.

Omar said one of those killed in the fierce gunbattle is believed to be a "high-ranking general". He declined to reveal details of the man, Star Online said.

Of those killed today, 31 were found dead in the village of Kampung Tanjung Batu and the other in Kampung Tanduo.

Army chief General Zulkifli Zainal Abidin said that the mopping up operation was moving slowly to ensure the safety of the policemen and soldiers.

Eight policemen also were fatally shot by the Filipino clansmen and their allies last week in various parts of Sabah.

Malaysia's Defence Minister Ahmad Zahid Hamidi earlier tweeted "do not trust the ceasefire offer by Sultan Jamalul Kiram. In the interests of the people of Sabah and Malaysia, destroy all the militants."

"We have created a tight cordon around the area, with the help of Navy and Armed Forces on land. Their food supplies are cut off. We have caught many of the intruders during their attempts to get food," said Sabah Police Commissioner Hamza Taib to a TV channel.

Ban voiced concerns about how the crisis might affect civilians, including Filipino migrants in Sabah, and urged "all parties to facilitate delivery of humanitarian assistance and act in full respect of international human rights norms and standards," according to a statement from his office.