In a judgment that is likely to bring relief to inter-faith couples, the Allahabad high court on Wednesday declared as optional the mandatory publication of notice of intended marriages under the Special Marriage Act, saying it violated the Right To Privacy. Making such publication mandatory would invade in the fundamental rights of liberty and privacy, the Lucknow bench of Allahabad high court said.

It would also affect the couple's freedom to choose marriage 'without interference from state and non-state actors', Justice Vivek Chaudhary said in his 47-page order.

He said it shall be optional for the parties to the intended marriage to make a request in writing to the marriage officer to publish or not to publish such a notice.

If the couple did not intend so, the marriage officer has to solemnise their marriage forthwith without publication of 30 days notice, the court said.

A section of the Special Marriage Act, 1954, requires an interfaith couple to give written notice of the marriage to the district marriage officer.

The court was considering a habeas corpus petition alleging that an adult girl is being detained against her wishes to marry her lover who belongs to a different religion.

The judgment comes against the backdrop of a recent controversial law enacted by the Uttar Pradesh government which prohibits forcible conversion for the sake of marriage.

The Uttar Pradesh Prohibition of Unlawful Conversion of Religion Ordinance, 2020, prohibits conversion of religion by marriage to be unlawful.

The single judge bench, however, clarified that it would be open for the marriage officer to verify the identification, age and valid consent of the parties or otherwise their competence to marry under the Act.

'In case, the marriage officer has any doubt, it shall be open for him to ask for appropriate details or proof as per the facts of the case,' the court noted.

The judgment came following a petition filed by Abhisek Kumar Pandey, who said that his wife Sufia Sultana, who had changed her religion to become a Hindu and renamed as Simran, married him as per Hindu rites.

He alleged that her father was keeping her in illegal detention and prayed that she should be put at liberty.

On an earlier direction of the court, Simran appeared before the court along with her father.

In the course of hearing, the couple stated that they were major and married out of their free will and wanted to live together.

The controversy between the parties ended but the court took notice of the fact that under Special Marriage Act, 1954, it was mandatory to publish 30 days' prior notice before the marriage officer solemnised the marriage of the intending couple.

Interpreting various pronouncements of the Supreme Court, the high court concluded that forcing the intending couple to publish the said notice infringed upon their fundamental rights of personal liberty and privacy.

It said that marriages in all religions are made either under personal laws or under the Special Marriage Act, 1954.

'Under any personal law, no such notice is required and the priest solemnises the marriage on the will of the intending couple and if legal objections arise later, they are free to move the competent court for redress.

'Then no reasonable purpose is achieved by putting the provision of 30 days' notice publication under the Special Marriage Act,' the court ruled.

"Thus, this court mandates that while giving notice under the Special Marriage Act, it shall be optional for the parties to the intended marriage to make a request in writing to the Marriage Officer to publish or not to publish a notice of 30 days and follow the procedure of objections as prescribed under the Act," justice Chaudhary said.

"In case the intending couple does not make such a request for publication of notice in writing, the marriage officer shall not publish any such notice or entertain objections to the intended marriage and proceed with the solemnisation of the marriage," the judge said.

The Prohibition of Unlawful Conversion of Religion Ordinance, 2020, which was notified by the Uttar Pradesh government on November 27, provides for a jail term of up to 10 years for any violations.

Under the law, which deals with different categories of offences, a marriage will be declared 'null and void' if the conversion of a woman is solely for that purpose.

The onus to prove that the conversion has not been done forcibly will lie on the accused and the convert.

The Supreme Court has, however, agreed to examine controversial new laws of Uttar Pradesh and Uttarakhand regulating religious conversions due to inter-faith marriages.

But the bench headed by Chief Justice S A Bobde refused to stay the controversial provisions of the laws and issued notices to both state governments on two different petitions and has sought response from both the state governments within four weeks.

The Uttar Pradesh law seeks to curb 'love jihad', a term coined by Bharatiya Janata Party leaders and right-wing activists to describe the crime against which Chief Minister Yogi Adityanath has also spoken out publicly.

Addressing bypoll rallies in Jaunpur and Deoria, Adityanath had used the Hindu funeral chant of 'Ram Naam Satya Hai' to threaten those who do not respect daughters and sisters. 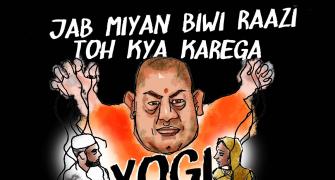 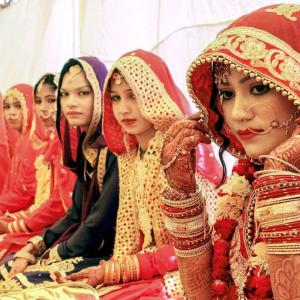