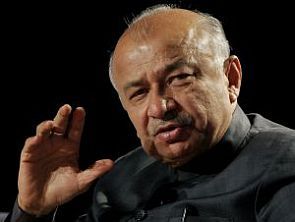 As many as 13 bombs were planted inside the Mahabodhi temple complex in Bodh Gaya of which ten had exploded injuring two monks, Home Minister Sushilkumar Shinde said on Monday.

"Today, I have the information of 10 blasts. A total of 13 bombs were placed there. I will not go into details where they were kept and all. Two persons have been injured -- 50-year-old Dorji and Bala Sanga (30)," Shinde told media persons.

Shinde was speaking on the sidelines of a function for inauguration of a hospital of Central Reserve Police Force in Talegaon, about 100 kilometers from Pune.

Ten serial blasts had rocked the Bodh Gaya temple town on Sunday with the world famous Mahabodhi temple facing the brunt of the terror attack as four blasts took place in shrine premises.

Authorities on Monday released the CCTV footage of the serial blasts at the historic Mahabodhi temple and adjoining areas. As a team of investigators from NIA, NSG and other agencies searched for clues in yesterday's 10 serial blasts that left two monks injured, Bihar Chief Minister Nitish Kumar said the state government will make a proposal to the Centre to ask CISF to take over the security of the shrine.

A team of the National Security Guard, which picked up samples from the area, has sent a preliminary report to the Union Home Ministry, saying the low-intensity bombs worked like improvised explosive devices and were triggered through analog clock timers.

The bombs contained a mix of ammonium nitrate and sulphur and were neatly packed in small cylinders, the report said.

Bihar Director General of Police Abhyanand said a person identified as Binod Kumar of Barachatti in Gaya district has been detained on the basis of a voter identity card in his name which was found during searches inside the temple after the explosions.

He told newsmen in Patna that lab tests have so far confirmed the presence of ammonium nitrate in the crude low intensity bomb used in the blasts but there were no trace of TNT or other explosive material.

The temple's sanctum sanctorum and the Mahabodhi Tree, under which Lord Buddha is believed to have attained enlightenment, did not suffer any damage in the blasts.

In the CCTV footage of the blast that took place on the left side of Mahabodhi tree in the temple premises at 5:25 am on Sunday, a boy and a girl, aged about 25 years, were seen walking on the road immediately before the blast.

The footage also showed another man, aged about 30 years, walking inside the Mahabodhi temple and going up to the blast site before making a quick exit.