3rd Indian on board cruise off Japan coast hit by Coronavirus

A third Indian crew on board a cruise ship off the Japanese coast has tested positive for the novel coronavirus, the Indian Embassy in Japan said on Friday as authorities confirmed that 218 people have been infected with the deadly virus on the quarantined ship. 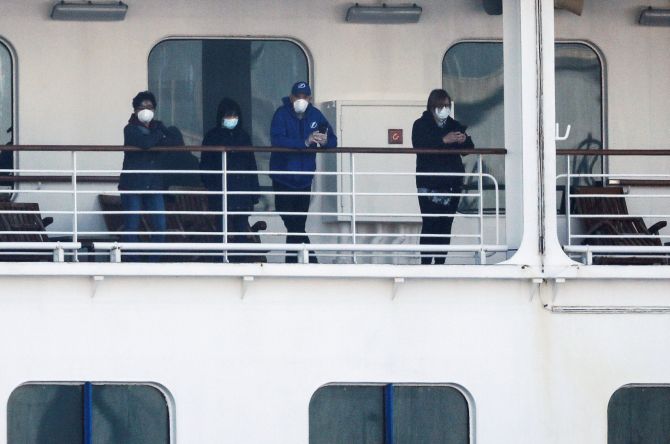 IMAGE: Passengers wearing mask are seen on the cruise ship Diamond Princess, as the vessel's passengers continue to be tested for coronavirus, at Daikoku Pier Cruise Terminal in Yokohama, south of Tokyo, on Thursday. Photograph: Kim Kyung-Hoon/Reuters

The cruise ship Diamond Princess with 3,711 people on board arrived at the Japanese coast early last week and was quarantined after a passenger who de-boarded last month in Hong Kong was found to be the carrier of the COVID-19 on the ship.

A total of 138 Indians, including 132 crew and 6 passengers, were on board the ship.

The Indian Embassy in Tokyo in a statement said three Indian crew members are among 218 people tested positive for the virus.

'All 218 people, including Indian nationals have been taken to hospitals for further treatment and quarantine. As per information available with the Embassy, no other Indian national on-board Diamond Princess Cruise ship has developed any symptoms of infection,' the statement said.

The embassy has contacted all three Indian nationals who have tested positive for COVID-19 and are currently receiving treatment at medical facilities.

"Their health conditions have been confirmed to be stable and improving. Embassy is also in constant contact with the relevant Japanese authorities to ensure the well-being of all Indian nationals on-board the ship," it said.

The Japanese government on Thursday announced that passengers aged 80 or older will be given the option to disembark the ship if they test negative for COVID-19.

Those who meet the age requirement and have pre-existing conditions or are staying in rooms without balcony will be prioritised for disembarkation.

No Indian national falls under this category, eligible for early disembarkation, the statement said.

The Indian Embassy has reached out to the Indian nationals (crew members and passengers) through e-mails and telephone calls and has explained to them about the quarantine regulations of Japanese authorities.

"Many of them have responded and expressed their understanding. The embassy has been in constant touch with the ship management company and the employer of the six passengers for appropriate facilitation," it said.

The death toll in China's novel coronavirus outbreak has spiked to nearly 1,500 with 121 new fatalities reported mostly from the worst-affected Hubei province while the confirmed cases of infection jumped to nearly 65,000, health officials said on Friday.

The coronavirus outbreak originated in central China's Hubei province in December last year and has spread to 26 countries, including India.

Several countries have banned arrivals from China while major airlines have suspended flights to the country.