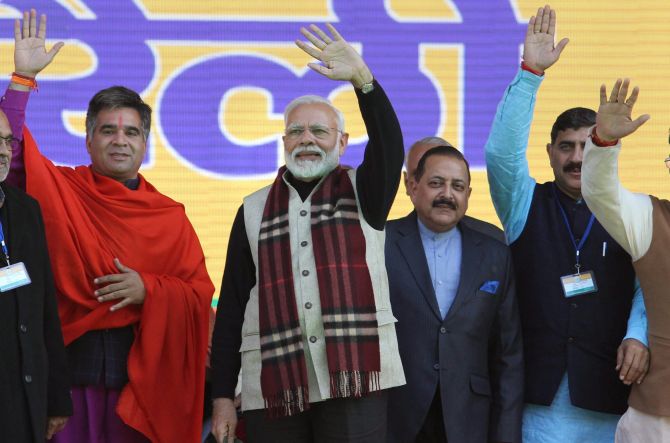 IMAGE: Prime Minister Narender Modi with BJP state president Ravinder Raina and others during a public rally after laying the foundation stone of AIIMS and Jammu-Akhnoor four-lane Highway during his visit at Vijay Pur in Samba district of Jammu and Kashmir, on Sunday. Photograph: PTI Photo

Prime Minister Narendra Modi on Sunday took a swipe at the Opposition for criticising his government's farmers' income plan, saying people sitting in air-conditioned rooms in Delhi do not know the importance of Rs 6,000 for a poor farmer living in distant and difficult areas.

To woo distressed farmers ahead of the general elections, the Centre has in the Interim Budget announced direct income support of Rs 6,000 per year to those holding cultivable land up to two hectare.

Speaking at the inauguration and laying of foundation schemes of various schemes, Modi said, Leh and Ladakh will also be benefited by this.

"Most of farmers here fill this criterion and will get Rs 6,000 annually. It will be disbursed in three installments and first installment will reach soon. I will be sending guidelines to state government Sunday," he said.

Modi said during his days as a Bharatiya Janata Party worker in the region he used to get demands from people in Delhi to bring vegetables from Leh because of their quality.

"Pradhan Mantri Kisan Samman Nidhi (PM-KISAN) is a phenomenal scheme for farmers. People sitting in air conditioned rooms in Delhi do not know what Rs 6,000 mean for a poor farmer living in distant and difficult areas of the country," he said.

Modi was in Leh to launch the first-ever university in Ladakh region.

It will be a cluster university comprising degree colleges of Leh, Kargil, Nubra, Zanskar, Drass and Khaltsi having administrative offices at Leh and Kargil.

The new terminal will be a modular, energy efficient and self-sustaining building of 18,985 sq. metres.

Ahead of elections, the prime minister also made a pitch for his return to the post, saying he will return to inaugurate schemes for which he is laying foundations stones today.

"I have inaugurated schemes which I had inaugurated earlier and I will come back to inaugurate schemes for which I am laying foundation stones today," he said.

He said the foundation stone for Rs 2,000 crore Leh-Kargil transmission line which will reduce power problems in the area was laid by him and he is inaugurating it too.

"Our work culture is different. Country has left behind work culture of delay and deflect ('Latkane' aur 'Bhatkane'). I have to oust this culture from the country in the coming five years. It is ensured that the project which is initiated is completed on time," he said.

He said weather brings to you a lot of hardship and the central government is committed to alleviate these problems of the area.

He said he has inaugurated and laid foundation stones of schemes and projects worth Rs 3,000 crore.

"The projects which have been inaugurated or whose foundation stones have been laid will improve not only the power situation but also connectivity of Leh region with other cities of the country, tourism, employment and education for the youth of the country," he said.

The climate of Leh is so great that if we create good education institutions, youths from across India will like to come here to study.

"We have to dream these things. In my mind I have such dreams," he said.

He said central is expanding connectivity to this region through Railways and Airways.

"Work on railway connectivity and new airport terminal is going on. No thought was spared to expand 30 year old building. Today I have laid foundation stone for new building and soon it will be inaugurated too," he said.

He said the terminal will provide ultra modern facilities and enhanced passenger handling.

"The survey on Bilaspur Mandi railway line has started. Some places work has started. Once completed, Leh to Delhi distance will reduce. Roads get disconnected during winters. This line will reduce this problem to a large extent," he said.

"To improve tourism, five new trekking routes have been opened. The Centre has increased duration of protected area permit from 7 to 15 days.This will help tourists to take their time to enjoy their visits and increase employment of the youths," he said.

Modi said three lakh tourists have visited the area and one lakh have gone to Kargil which shows that more than half of tourists in Jammu and Kashmir have come to Leh.

Forty percent of Leh population comprises young students who have been demanding a University which has been fulfilled today, he said.

This cluster University will use resources of degree colleges running in Leh, Nubra, Zanskar, Kargil, he said.

"Government is trying to reach people who have not been getting the benefit development. The Government has also taken a big decision for nomadic tribes who are difficult to reach for extending government benefits," he said.

The government has decided to form a welfare development board for these people so that development benefits reach them quickly, he said.

"I am happy that Ladakh Autonomous Hill Development Council Act has been amended to give more powers to the Council in financial areas," he said.

"Now you do not have to go to Srinagar and Jammu for your needs. Most of the works will be completed here", he said.

Later in Jammu, attacking the Congress over its promise of farm loan waiver, Modi said on Sunday that the party uses the measure only to win elections.

The Congress had promised to waive farmers' loans worth Rs 6 lakh crore in 2008-09, but it gave a loan relief of Rs 52,000 crore only after coming to power, he claimed.

"CAG report found that about 25-30 lakh people who got loan waiver were not even eligible for it," Modi said at a rally at Vijaypur in Jammu.

Ridiculing the loan waivers given by the Congress in Madhya Pradesh, the prime minister said some beneficiaries have been given cheques of Rs 13 only.

He said under his direct benefit transfer PM-KISAN scheme, Rs 75,000 crore will be allocated annually. It means Rs 7.50 lakh crore will be deposited in farmers' accounts in the next 10 years.

The scheme aims to cover 90 per cent of the farmers who have less than five acres of land. Rs 6,000 will be transferred to their accounts annually in three equal installments of Rs 2,000 each, he said.

"People know the track record of the country's 'naamdar'. They get 'fever' of loan waivers just before elections... They try to act as 'messiah' of farmers by announcing farm loan waivers once in 10 years," he said referring to the United Progressive Alliance rule.

Ironically, the BJP had also announced loan waivers for farmers in Uttar Pradesh ahead of assembly elections in 2017.

After assuming power, Chief Minister Yogi Adityanath had announced loan waivers of up to Rs 1 lakh relating to small and marginal farmers.

Making a strong pitch for the Citizenship (Amendment) Bill, Modi said his government would stand with the children of 'Maa Bharti' who have faced persecution in Pakistan, Afghanistan and Bangladesh.

Addressing a rally in Vijaypur, Modi said 'there are many children of Maa Bharti who have faced persecution in Pakistan, Afghanistan and Bangladesh... We will stand with those who were part of India at one time, but got separated from us' due to the Partition in 1947.

Targeting the Congress for its opposition to the piece of legislation, he said that party, when it was in power, did not pay 'attention of the pain of our brothers and sisters'.

"But we have brought the Citizenship (Amendment) Bill with a commitment... If they are discriminated on the basis of faith, the country will stand up with them," the prime minister said.

He also referred to the Kartarpur Corridor issue to target the Congress.

"The previous governments had the tendency to ignore the necessities and sentiments of the country. You are well aware of that.

"Take Kartarpur corridor issue for instance. Had they paid attention, then the land of Guru Nanak Dev would have been a part of India," Modi said, referring to the Gurdwara Darbar Sahib in Kartarpur in Pakistan where Sikhism founder Guru Nanak had settled.

Modi addressed public meetings in Leh and Vijaypur in Jammu, after inaugurating several development projects in Jammu and Kashmir.

He said the BJP-led government at the Centre was dedicated to the causes of Kashmiri Pandits, who had to abandon their homes in Kashmir Valley in the wake of spread of terrorism.

"They had to leave their homeland, the pain that they had to undergo, I have never said this but their pain is within me too," Modi said.

Modi on Sunday laid foundation stones for several development projects, including an All India Institute of Medical Sciences and an Indian Institute of Mass Communication, in Jammu.

Modi said setting up of new AIIMS would transform health care facilities and will also provide new opportunities to the youth.

The people of Jammu protested for almost two months for setting up of AIIMS in the region.

The National Conference and the Congress also staged demonstrations here in support of the demand.

The proposed AIIMS will be a 700-bedded hospital.

The prime minister said Rs 750 crore has been granted to the state for setting up of five new medical colleges.

"The sessions will start soon (in these medical colleges). From the last 70 years, there were only 500 (MBBS) seats, but the BJP government has now doubled the seats," Modi said.

He also laid the foundation stone for northern regional centre campus of IIMC in Jammu. It will be set up at a cost of Rs 16 crore.

"It is moment of pride for us that Prime Minister Narendra Modi has laid the foundation for IIMC campus here," said IIMC Director General K G Suresh.

In addition, 15 acres of land has already been earmarked for setting up of a permanent campus in Kotbalwal area of Jammu city, he said.

The prime minister laid the foundation stone for 624-MW Kiru hydroelectric project in Kishtwar. It is a run-of-the-river project across the Chenab and once completed, it will generate 2272 million units of electricity annually.

He inaugurated the 9-MW Dah hydroelectric project. Located in Dah near village Datang, this project is a run-of-the-river scheme.

Modi also dedicated to the nation the 220-KV Srinagar-Alusteng-Drass-Kargil-Leh transmission system. The foundation stone of the prestigious project was laid by Modi in August 2014.

He laid the foundation stone for 1,640-metre span double-lane bridge over the Chenab river in Sajwal. 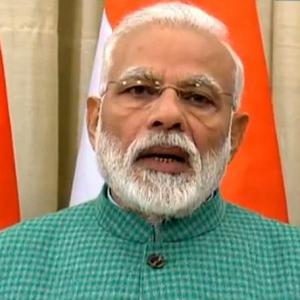