The global community on Wednesday rushed much-needed life-saving drugs, oxygen cylinders and machinery, that India needs to combat the massive surge in the coronavirus cases. 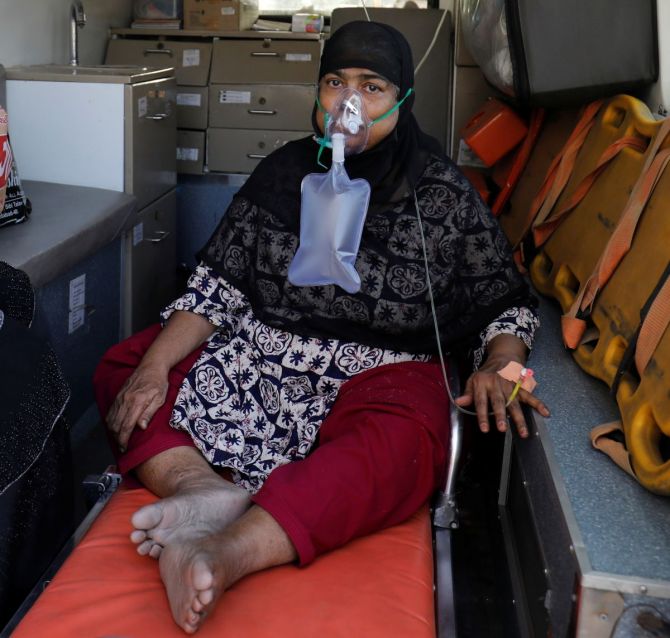 IMAGE: A patient wearing an oxygen mask sits inside an ambulance waiting to enter a COVID-19 hospital for treatment, amidst the spread of the coronavirus disease in Ahmedabad. Photograph: Amit Dave/Reuters

India is struggling with a second wave of the pandemic with more than 3,00,000 daily new coronavirus cases being reported in the past few days, and hospitals are reeling under a shortage of medical oxygen and beds.

United States President Joe Biden, who spoke with Prime Minister Narendra Modi on Monday, has said that his country is sending immediately a whole series of help that India needs, including providing for those Remdesivir and other drugs that are able to deal with this.

"We are sending the actual mechanical parts that are needed for the machinery they have to build a vaccine, and that is being done as well," Biden told reporters at a White House news conference on Tuesday.

The US president said he had discussed with Modi when the US would be able to send actual vaccines to India.

"The problem is right now, we have to make sure we have other vaccines like Novavax and others coming on probably, and I think we will be in a position to be able to share vaccines as well as know-how with other countries who are in real need," Biden said.

In London, Britain on Wednesday confirmed that following the first tranche of vital medical equipment a further 400 oxygen concentrators will be sent to India over the course of Wednesday and Thursday to help the country meet an overwhelming demand amid a “horrific” second wave of the COVID-19 pandemic.

"The thoughts of members across the House are with the people of India," British Prime Minister Boris Johnson told the House of Commons. "We are supporting India with vital medical equipment and we will continue to work closely with the Indian authorities to determine what further help they may need."

It was also highlighted that Britain was the first country to deliver support, as the first shipment of 200 ventilators and 95 oxygen concentrators arrived in New Delhi on Tuesday and is already being distributed to Indian hospitals.

British Prince Charles made an impassioned plea as he backed an emergency appeal launched by his charity, British Asian Trust, and urged people to help India.

"With support from the Indian diaspora, the British Asian Trust has launched an emergency appeal for India to channel this desire to do something about this terrible situation and help save lives,” the 72-year-old heir to the British throne said in a statement released by Clarence House.

Canadian Prime Minister Justin Trudeau has announced to provide $10 million to India to support its fight against the unprecedented second wave of the pandemic.
Trudeau said that Foreign Minister Marc Garneau had "direct conversations" with his Indian counterpart S Jaishankar about how Canada can best help, including the donation of extra medical supplies.

Singapore said on Wednesday that it has sent a consignment of oxygen cylinders to support India's COVID-19 pandemic response.

The Republic of Singapore Air Force is transporting the cylinders on board two C-130 aircraft from Singapore to West Bengal, according to a report by the Channel News Asia.

South Korea has said that it will provide India with oxygen concentrators, COVID-19 diagnostic kits and other aid items.

New Zealand Foreign Minister Nanaia Mahuta said on Wednesday that her country will give 1 million NZ dollars (about $7,20,365) to the Red Cross to assist India in COVID fight.

"We stand in solidarity with India at this difficult time, and commend the tireless efforts of India's frontline medics and healthcare workers who are working hard to save lives,” said Mahuta.

The International Federation of the Red Cross is working directly with the local Indian Red Cross Society to provide oxygen cylinders, oxygen concentrators, and other crucial medical supplies.

"This is a collective effort that can save lives, defeat hunger, assure distressed people, and help India in its decisive fight against COVID-19," Sewa International USA said.

On Tuesday, Sewa collected a shipment of 2,184 oxygen concentrators to be sent to India.

In less than 100 hours of launching the fund-raising campaign, more than 66,700 Indian-Americans came out to raise over USD 4.7 million for COVID-19 relief efforts in India, it said.

The US India Chamber of Commerce DFW and the Indo American Chamber of Commerce of Greater Houston -- both from Texas -- in partnership with the USICOC Foundation shipped out the first batch of 20 ventilators to the Indian Red Cross Society in Delhi to be disbursed to hospitals and field teams in hard-hit areas, a media statement said.

Another next 30 ventilators are scheduled to ship out in the next few days.

According to official data on Wednesday, India saw a record single-day rise of 3,60,960 coronavirus cases, which pushed the total tally to 1,79,97,267, while the death toll crossed two lakh following 3,293 fresh fatalities. 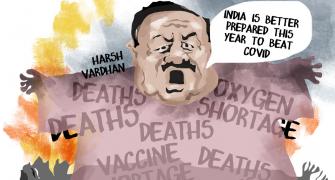 Dom's Take: All Well With You, Dr? 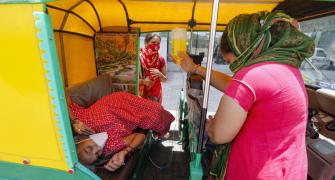 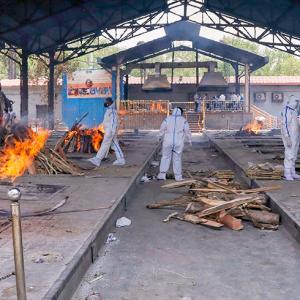 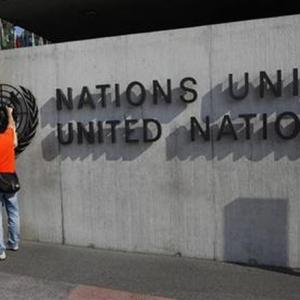