News
Business
Movies
Sports
Cricket
Get Ahead
Money Tips
Shopping
Sign in  |  Create a Rediffmail account
Rediff.com  » News » The week of reckoning for the Samajwadi Party

On Thursday, November 3, Chief Minister Akhilesh Yadav will launch his Samajwadi Rath Yatra.
The official launch of the party's election campaign, but also a way of assessing how much traction he has among the people.
Virendra Singh Rawat and Amit Agnihotri report from Lucknow. 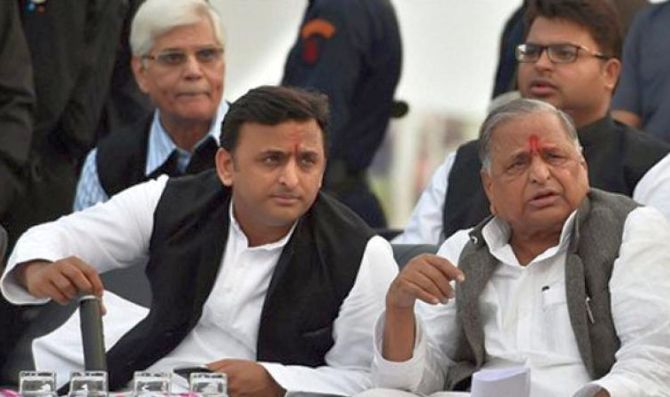 That's what you hear at the Samajwadi Party office in Lucknow, as the cadres struggle to come to terms with a deep schism in a leadership they had taken for granted, had thought stood like a rock.

Two events this week are going to deepen the faultline.

Ostensibly, the official launch of the party's election campaign, but, his supporters say, also a covert way of assessing how much traction he has among the people.

The leadership will keep a roster of who attends the function and who doesn't.

Obviously, with an especially sharp eye on the younger elements. Akhilesh will not be attending; he cannot be in two places.

His supporters? That's what the SP wants to know -- who's standing with whom. 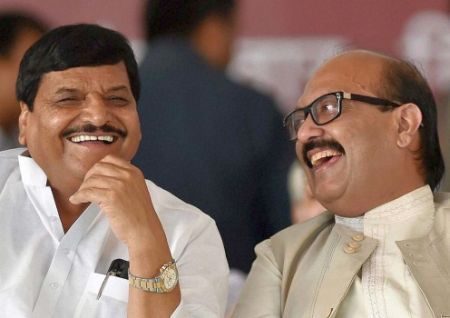 To say the SP faces the worst existential crisis in its history is an understatement.

Will there be a split?

What will it mean for the assembly elections?

What is certain is that ahead of the 2017 state poll, the party, facing strong anti-incumbency over a perceptibly bad law and order situation and formidable opposition in the form of the Narendra Modi-led Bharatiya Janata Party and Mayawati's Bahujan Samaj Party, is consumed by infighting and public acrimony.

It is to undo the damage caused by images of the slogan shouting and verbal duels between Akhilesh and uncle Shivpal, with a supposedly supreme Mulayam only looking on, that Akhilesh has decided to go on the war path.

Although he has said he would never considered splitting and forming a new party, the chances of the party fighting the 2017 poll as a cohesive unit have fallen flat.

The faultlines seem far too deep to mend.

He has many backers, egging him on, not from altruism but because they see a political space opening for capture, in a state that sends 80 to the Lok Sabha and has a 403-member legislative assembly.

Some of his supporters aren't from the party, but are converts, from the bigger political ecosphere, including those who till recently were big critics of the SP administration. 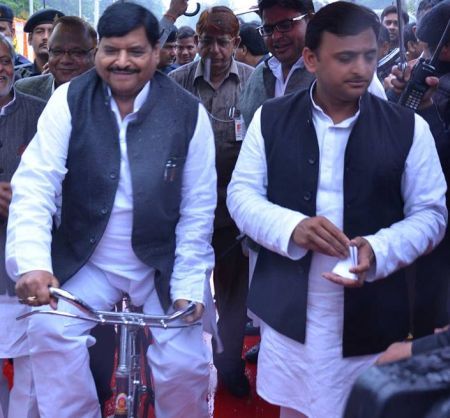 IMAGE: Akhilesh Yadav has fallen out bitterly with his uncle Shivpal Yadav, seen here astride the Samajwadi Party's election symbol, the cycle.

On the face of it, the cadre is divided between Akhilesh and the Mulayam-Shivpal combine.

The two factions loosely represent the youth leaders and the old guard, respectively. Yet, this could be oversimplifying.

During his CM tenure, Akhilesh has been in the position of being able to dispense patronage, IOUs, favours.

Age apart, there are groups that see a serious business risk in the emerging split.

A social scientist says he is reminded of what Rajiv Gandhi tried to do with the Congress at the Bombay session of that party in 1985.

Saddled with a Congress that was his mother Indira Gandhi's, Rajiv Gandhi went to war against it. He excoriated the leaders as 'power brokers.'

'We obey no discipline, no rule, follow no principle of public morality, display no sense of social awareness, show no concern for the public weal. Corruption is not only tolerated, but even regarded as the hallmark of leadership,' Gandhi said in a speech that many said was his political obituary -- he tried to replace one set of power brokers with another but failed.

The challenges for Akhilesh are similar. 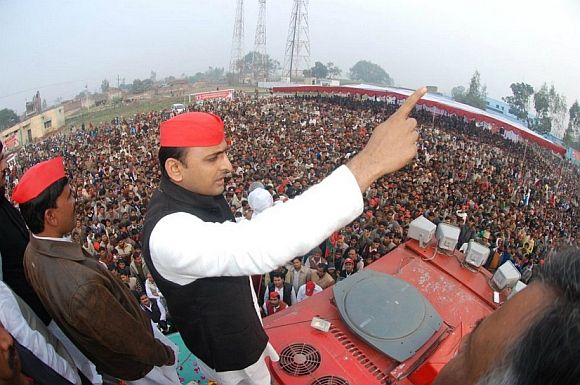 IMAGE: Akhilesh Yadav at a rally during the 2012 assembly election campaign in Uttar Pradesh.

In the 2012 UP poll, the SP's success was credited to their winning formula of combining the votes of Muslims and backward castes, especially Yadavs, apart from the youth and first-time voters.

Akhilesh was leading the campaign and had promised free laptops and tablets if voted to power.

With the perception of the SP being a divided house, the first casualty will be division of its committed Muslim votes.

These votes generally get consolidated in favour of a party or candidate seen to have the best chance of defeating the BJP.

Azam Khan, the party's Muslim face, has in a letter to the brass warned about the shift of Muslim voters and the dangers of taking this support for granted.

Many in the Congress and the BSP are waiting to take over the community's leadership, using them to make an entry into the seat of power.

Azam Khan has made tenuous common cause with Akhilesh also to keep at bay the Ansari brothers of eastern UP who lead the Qaumi Ekta Dal, the party on whose merger with the SP led to Akhilesh throwing a tantrum.

The brothers are dreaded by others but popular in the community. And leaders of the Ansari community, the most populous Muslim caste group in the state.

Akhilesh believes they are mafia. Shivpal and Mulayam Singh believe they are true representatives of Muslims... and, who among us hasn't broken the odd law?

The Congress views Akhilesh as an instrument for its own ambitions. It loses nothing by sewing a Bihar-like alliance to defeat the BJP in the state. However, it is not convinced Akhilesh has the backbone to lead a rebellion.

"You cannot take a view till the SP drama settles, but we are watching the evolving situation," Congress spokesperson Manish Tewari said when asked about Shivpal's comment that his party was in touch with the Congress and the Ajit Singh-led Rashtriya Lok Dal for a pact.

The Congress has a dilemma. Supporting Akhilesh to the point where he breaks with Mulayam and the SP is one thing. Entering a pact with the party and CM it has opposed these past five years is another.

The nay-sayers recall ahead of the 2009 national elections, the Congress explored a pre-poll pact with the SP, but Rahul Gandhi took a firm position to go it alone. This section believes after the 1992 Babri mosque demolition, the SP grew at the expense of the Congress, which was pushed to the margins.

It is also true, though, that with a weakened and divided SP, it is Akhilesh who suits the Congress more than Mulayam.

Akhilesh is young and malleable. A reason why Bihar CM and JD(U) leader Nitish Kumar has been saying publicly for six months that Akhilesh should be the new face of a Left-Centre grouping, a hint that Mulayam was past his sell-by date. 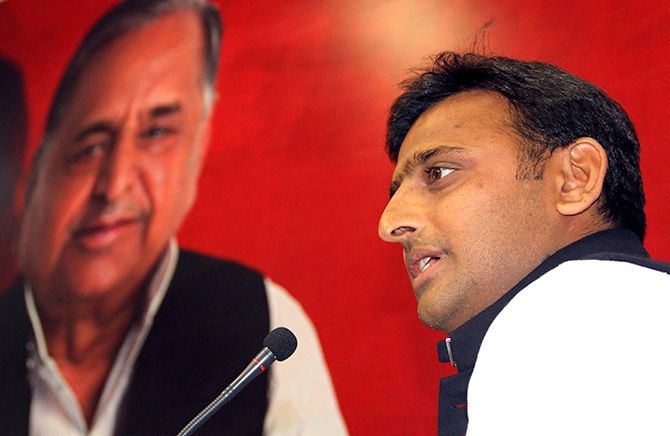 If Akhilesh does split the party, what does he bring to the table?

In 2012, the SP went to the assembly polls projecting Mulayam Singh as CM nominee. Akhilesh, till then looking after the party's youth wing, contributed significantly to the performance, the party getting 222 of the 403 seats.

Akhilesh was on the road six months ahead of the polls and covered most parts of the state on cycle, car and helicopter. His cycle rallies were a big draw among young voters. He also played a role in ticket distribution.

Will Akhilesh be able to make the same magic in 2017? That is what he and others are trying to assess. 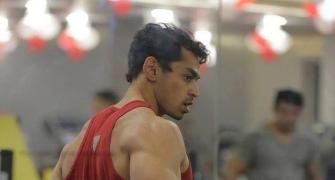 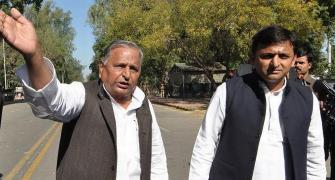 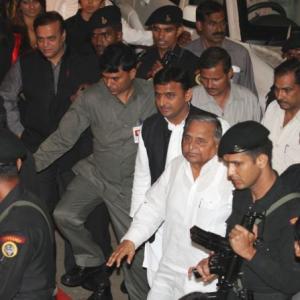 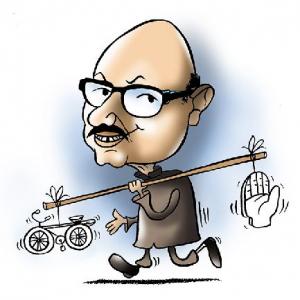