News
Business
Movies
Sports
Cricket
Get Ahead
Money Tips
Shopping
Sign in  |  Create a Rediffmail account
Rediff.com  » News » The story that brought a tear to a General's eye

The story that brought a tear to a General's eye "You have shown the world that one can live life even in the face of severe adversities," Lieutenant General P M Hariz, General Officer Commanding-in-Chief, Southern Command, told residents at the Paraplegic Rehabilitation Centre, Khadki, Pune.

Around 150 differently abled serving and retired soldiers of all the three services attended the programme, which also saw the participation of other institutes like the Queen Mary's Technical Institute Artificial Limb Centre, Pune, and the Asha School.

The event also saw the release of Born To Fly, Air Commodore Nitin Sathe's biography of his National Defence Academy course mate, the late Rediff.com columnist Flying Officer M P Anil Kumar, who lived at the Paraplegic Rehabilitation Centre for over 25 years before his death in May 2014.

'M P' was a dashing MiG-21 pilot in the Indian Air Force before a tragic accident cut short his flying career and rendered him a paraplegic at the age of 24. IMAGE: General Hariz meets with differently abled soldiers at the event.
These soldiers, the general said, continue to inspire others to live a full and wholesome life.

"You have served your unit and the country well," General Hariz told the differently abled soldiers.

"You have held the flag of the unit and the establishment high. You have shown the world that one can live life in the face of severe adversities. You have become a source of inspiration to the family and society," the general said.

"Every person hopes to live a life free of any accidents. You faced difficulties with a brave face and must show others that this is possible. Your contribution is beyond measure," the general added.

Visibly overcome by emotion after hearing about M P Anil Kumar's life, the general -- who like 'M P' is an alumnus of the Sainik School system -- said, "Anil Kumar serves as an inspiration to all. Through this book, his story will go out of the confines of the four walls of this institute. It will inspire those who do not want to live." 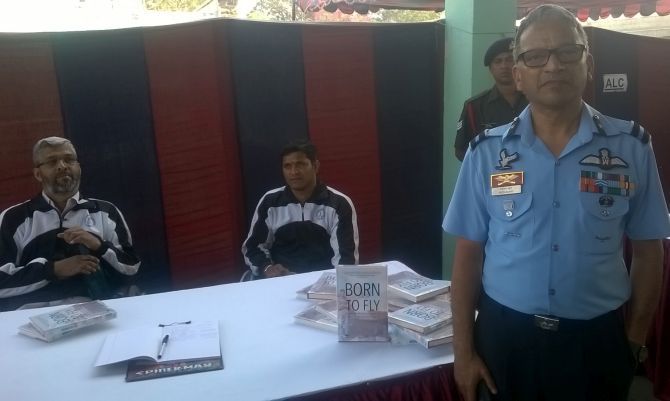 "We first met in 1981 when both of us joined the NDA," Air Commodore Sathe recalled. "He went on to become a fighter pilot while I went to the helicopter wing. After he passed away in 2014 I thought that his story should be told to the world."

Explaining why he felt drawn towards telling 'M P's story, the air commodore added, "He won himself a second life. As he was unable to work with any body part except the head, he learned to operate the computer by holding a pencil in his mouth."

"My book narrates Anil Kumar's journey from a village boy in Kerala to being an inspiration and an example to many," Air Commodore Sathe -- whose first book For A Few Good Men and the Angry Sea chronicled how the IAF rebuilt its air base on the Car Nicobar island after it was devastated in the December 26, 2014 tsunami -- said.

You can read some of M P Anil Kumar's contributions to Rediff.com in the related links below.

You can buy a copy of Born to Fly here.