Sanjeev Nayyar travels across India from Barmer to Arunachal to Mahabalipuram, and comes back both humbled and impressed with the women he interacted with through his journey. These, are his experiences:

During the last few months, the concept of equality and women's rights have dominated the media discourse. The feminists make it sound as if discrimination against women is endemic to the Indian society. If India was such a patriarchal country, could the Indian civilisation have survived 5,000 years?

Veena Talwar, author of Dowry Murder: The Imperial Origins of a Cultural Crime has some interesting insights on why the status of women fell, at least in Punjab, the state of her research.

"The British brought in the notion of private property rights in land, and replaced communal or joint rights. The British gave titles to the tillers, and land became a commodity. Women did not get titles to the land, she told Rediff.com in an interview.

This article shares the author's personal interactions and observations with women of Bharat i.e. in Barmer, Mahabalipuram, Kashi, Barsana, Imphal and Along (Arunachal Pradesh). 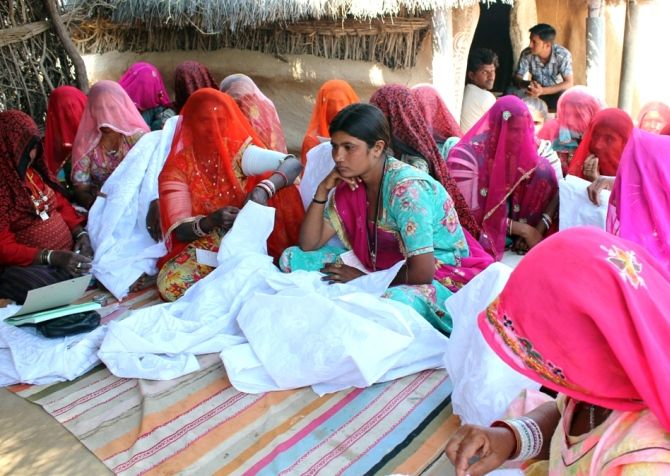 IMAGE: These young women in their ghoonghats did not hesitate to compliment the author on his Rajasthani-style mustache. All photographs: Sanjeev Nayyar

In Barmer is a non-governmental organisation called Gramin Vikas Evam Chetna Sansthan. They specialise in applique patchwork and hand-made embroidery. The secretary takes me to a village, about 30 kilometre from Barmer.

There are some 20-odd ladies gathered in a hut. Nearly all of them have ghunghats (veils) to cover their faces, since I am an outsider. The accountant from the NGO keeps a record of the pieces he gives to every woman; and when the work is completed, makes an entry of it in their passbook, and makes the payment at the end of the month.

I spent about two hours chatting with these women. They are super confident and correct errors made by the NGO accountant in their passbooks. I ask them if they did this work full-time. They say embroidery was done in their spare time to supplement incomes; looking after the household and helping in fields takes most of their time.

Given my urban sensibilities, I would say they are superwomen. They laugh and say they could do a lot more if only they had competent husbands. Not a trace of feeling inferior or being suppressed there. Their grouse: the government considers them as Below Poverty Line families but does not provide benefits. Point made with a smile. No negative energy!

Whilst leaving, the younger ladies do not hesitate to appreciate my Rajasthani style moustache. These women did not hold back their thoughts. IMAGE: This trinket seller at the Shore Temple Beach in Mahabalipuram, confidently calls herself a businesswoman, and knows that the knowledge of Hindi means more business.

As I walk to the beach, the lady (on the right, pictured) shouts out to me in Hindi, “Sir wife ki liye necklace le lo (Sir, take a necklace for your wife),'” With memories of the anti-Hindi movement in Tamil Nadu, I wonder how come she speaks Hindi so well. Pat comes the reply, “Main businesswoman hoon (I am a businesswoman), I get lots of customers from the North so learnt Hindi.

I observe her for about five minutes and realise that she instantly knows which region of India a tourist is from. Impressed, I ask permission to click her picture.

“First buy something then say something good about me,” she says. I love your smile and features,” I reply.

The woman is confident enough to (a stranger like me) to let me admire her, but also smart enough to understand how the knowledge of Hindi means more business. 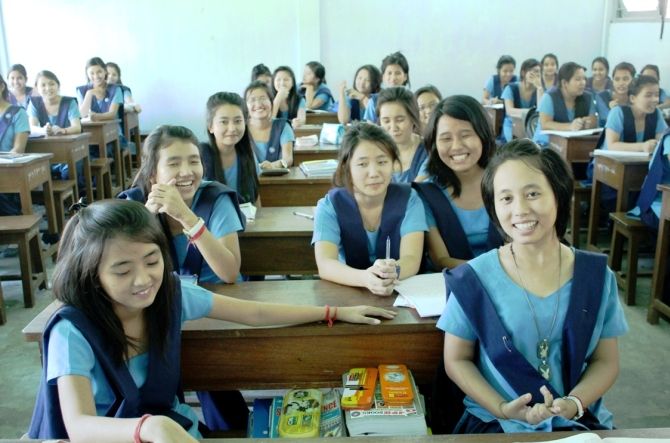 IMAGE: The author visited five schools and found the girls to be exceptionally bright and well-informed.

This is an all-girls school in West Siang district whose inhabitants mainly belong to the ‘Adi Galo’ Tribe. Just to give you a sense where Along is: We cross the Brahmaputra River slightly ahead of Dibrugarh, and it is about a 12-hour drive from there.

During an interactive session with students some of the questions students ask me are:

a. Why is India’s political system in such a disarray and the country in a bad state?

b. If we come to Mumbai, could we get them to meet Amitabh Bachchan?

c. They know about Arnab Goswami's daily show, and are quite amused with it.

d. How to become a doctor, a Indian Police Service officer, a chartered accountant or a graphic designer, and which of these is a better career.

Their request -- why doesn’t the government set up institutes of higher education in Arunachal so they don’t have to leave the state?

These confident girls do not feel offended because of the fact that the government has classified them as a Scheduled Tribe.

I visit five Vivekananda Kendra schools and find the girl students to be exceptionally bright and well-informed in all of them. IMAGE: A Manipuri woman showcases an embroidered shawl. Ima Keithel, which literally translated, means mother’s market is perhaps the oldest and only one of its kind in Asia. It is a market wholly operated by women.

Imphal is probably the only place in India to have an all-women market -- it is called 'Ima Keithel' or Mother’s Market.

It consists of three buildings, is huge and may have at least 300 stalls run by women, although I never did a count. You can buy vegetables, fish, shawls, stolls, wedding clothes, artificial jewellery, pots, sweets, embroidered stuff, puja material, and women wear etc. Shops open from about 7.30 am and close by 8 pm. It is a great place to get a first-hand experience of the Manipuri people and culture.

A friend’s sister from Mumbai goes bonkers shopping and buys stuff as if there is no tomorrow.

I wonder then; how men may feel because they are denied the right to have a shop in this well-designed, clean and centrally located market… IMAGE: To most visitors to Varanasi, Assi Ghat is known for being a place where long-term foreign students, researchers, and tourists live.

Dev Deepavali is celebrated on Kartik Purnima. It is considered auspicious to bathe in the Ganga that day. Women start bathing from 3 am, men invariably start arriving after sun-rise.

After clicking this picture, I ask a 15-year-old tea-seller, whether women were comfortable bathing as they did at the ghat? With a very sarcastic look, he says, “The minds of you shehar wale (you from the big cities) are corrupt.

I am chastened by this sermon by a young chaiwala and embarrassed with my Victorian attitude towards sex. 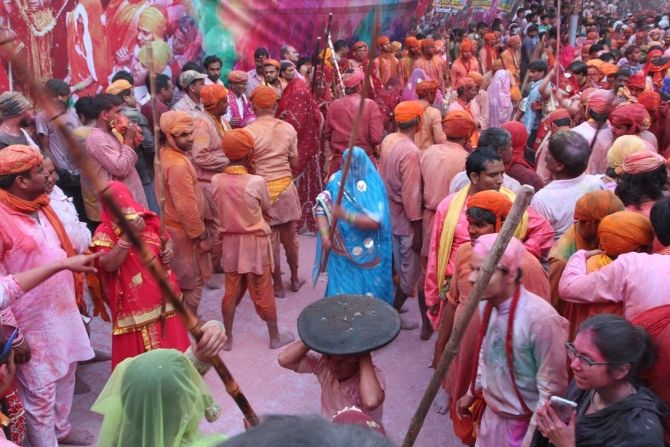 IMAGE: The women of Barsana start preparing for this a month in advance. It is said that their mother-in-laws feed their daughters-in-law rich food so that they can show off their prowess on the 'battle zone' on the day!

The Holi celebrations in Braj begin at Barsana, Radha’s (Krishna’s consort) village, six days before Holi. Krishna arrives, with the men from Nandgaon. The people of Nandgaon and Barsana play Holi together. The men wear huge turbans decorated with leaves to protect themselves from the colour and beatings of the women of Barsana.

Lathmar Holi (literally beating with a stick Holi) is played at sunset, when women dressed in beautiful saris hit the men with sticks. They unleash a shower of blows on the ‘naughty’ boys of Nandgaon to teach them a lesson for all the broken pots and for teasing the girls of Barsana.

To a western eye, the festival may seem strange. Since Lathmar Holi doesn't fit into a typical liberal narrative, it attracts large number of foreigners and also Indians from other cities.

From a Bhartiya perspective, I sensed the joy-respect on both sides and the purity in interaction. In fact, after the hitting gets over, many a man touch the feet of the woman and give shagun (money).

There are many more similar stories about the women of Bharat. This is not to imply their conditions are perfect. Nowhere in the world are relations perfect!

Instead of imposing western concepts of equality we need a different approach.

India's progress has to be preceded by the progress of her women. So if we want Bharat Mata to prosper, then we need promote education for the girl child, give women fiscal concessions, so property stands in their name and make them financially independent.

Author and Kriyaacharya Jyoti Subramaniam adds, "Empowerment of women is not to be given with an attitude of benevolence but has to become a mindset. How we treat our mothers, sisters, wives and daughters is what empowers them. This applies not only to men but to women as well."

The words equality and rights must be understood as atma-samman (self-respect) and dharma (duty).

For Christ's sake let us not try to make men out of women. 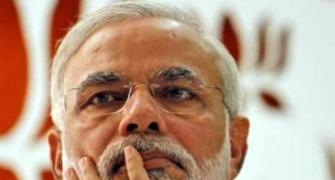 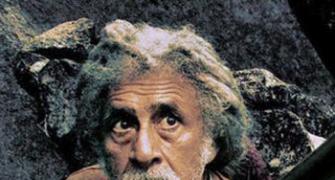 'Blueberry Hunt got delayed because I was broke' 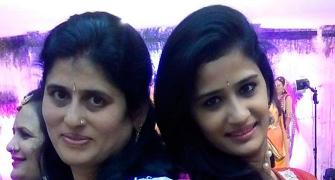 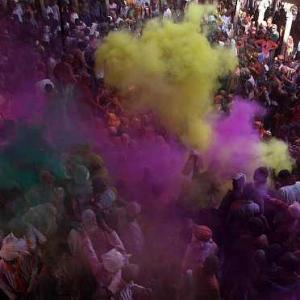 PHOTOS: Riot of colours as UP relives Radha-Krishna tale