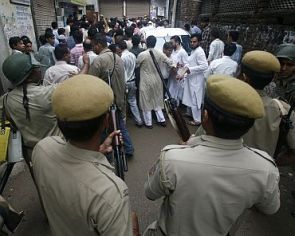 Following is the series of events leading to conviction of suspected Indian Mujahideen terrorist Shahzad in the September 19, 2008 Batla House encounter case by a Delhi court:

Apr 2010: Charge sheet filed in a Delhi court in the case. Junaid is declared a proclaimed offender. The charge sheet says that the encounter was part of probe into the September 13, 2008 serial blasts at Karol Bagh, Connaught Place, Greater Kailash and India Gate that had left 26 dead and 133 injured.

Feb 15, 2011: The court frames charges against Shahzad of murder, attempt to murder, conspiracy and various other sections under the Indian Penal Code.