Ahead of its presidential poll, the Congress on Monday issued a set of guidelines for the election, debarring party office-bearers from campaigning for candidates. 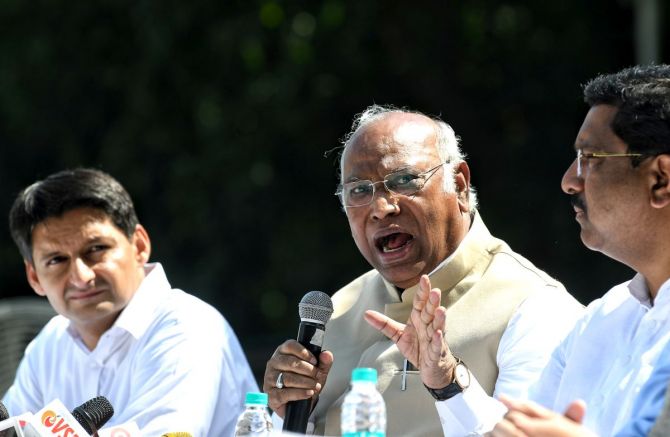 Those who wish to support any candidate will have to first resign from their organisational post, stated the guidelines issued by the Congress's central election authority.

Mallikarjun Kharge and Shashi Tharoor are contesting the Congress president election in their personal capacity, the party said, noting that the "delegates are free to elect any one of them, as per their choice, through ballot paper".

The Congress asked all PCC presidents to extend courtesy to the candidates during their visits to the respective states.

The PCC presidents will provide and arrange a meeting hall, chairs and other public announcement equipment for the candidate who wishes to hold the meeting of PCC delegates, it said.

"However, no such meeting can be called by the PCC president in their personal capacity," it warned.

Organising the meeting is the task of the proposer or the supporters of the contesting candidates, it pointed out.

During the election, the Congress said, no candidate can use vehicles for bringing voters nor resort to any "undesired pamphleteering" or any other kind of publication propaganda.

"Controverters of these procedures shall render the candidature’s election invalid and make them liable for disciplinary action," the party warned.

It said utmost care must be taken to ensure that there is no mala fide campaign against any candidate.

"The same would bring disgrace to the party. The sensitivity of the election process must be upheld at any cost," it cautioned.

In a tweet, Tharoor said he welcomes the announcement by the party's chief election authority on the organisation's presidential election.

In another tweet, he said he has resigned as the chief of the Professionals' Congress.

"For those asking: I have already submitted my letter of resignation as head of @ProfCong to the Congress president last month," he said.