Tharoor to be quizzed in a day or two: Delhi police chief 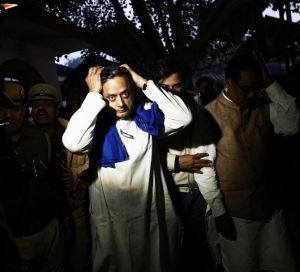 Congress MP Shashi Tharoor may be questioned in a day or two in connection with the mysterious death of his wife Sunanda Pushkar, Delhi Police Commissioner B S Bassi said on Monday.

The police chief maintained that all those people relevant in the case are being examined by the Special Investigation Team so that a consistent story emerges in the high-profile case.

Asked about reports that the then I&B Minister Manish Tewari who was travelling on the same flight from Tiruvananthapuram to Delhi on January 15 on which Tharoor and Sunanda had a bitter spat can also be questioned in the case, Bassi did not rule out the possibility.

"See I would like to tell you that everybody who has information in this case, we will talk to them…and look at specifics which throw light. Sharing specific details will not be possible," he said.

Asked whether the Delhi Police will issue Tharoor a formal notice to join the probe, he said that these are minor details which are with the SIT.

"I have told you that we want to proceed as fast as possible in this case and for that purpose our intention is to quickly finish questioning all the people related to the case so that we can decide whether there is any need to question others after examining," he said.

Sunanda, 51, was found dead in her suite at a five-star hotel in south Delhi on the night of January 17, 2014, a day after she was involved in a spat with Pakistani journalist Mehr Tarar on micro-blogging website twitter over the latter's alleged affair with Tharoor.

Her viscera samples have to be sent to a foreign lab in the US or the UK to determine the nature and quantity of the poison which caused her death, according to the police.

The police chief also informed that the process to send the viscera samples of Sunanda Pushkar to a lab abroad is on.

Some of those questioned in the case so far include Narayan Singh, Tharoor's family friend Sanjay Dewan, the hotel doctor who pronounced her dead and hotel's staff including its manager.

Sources said that police will also question in a day or two a woman journalist with whom Sunanda had spoken before her death and Tharoor's PS Abhinav Kumar who had informed the then SHO of Sarojini Nagar police station about the death.