Unidentified terrorists shot dead a lawyer in Srinagar on Thursday, police said, the second political or social activist to be killed within a 24-hour period. 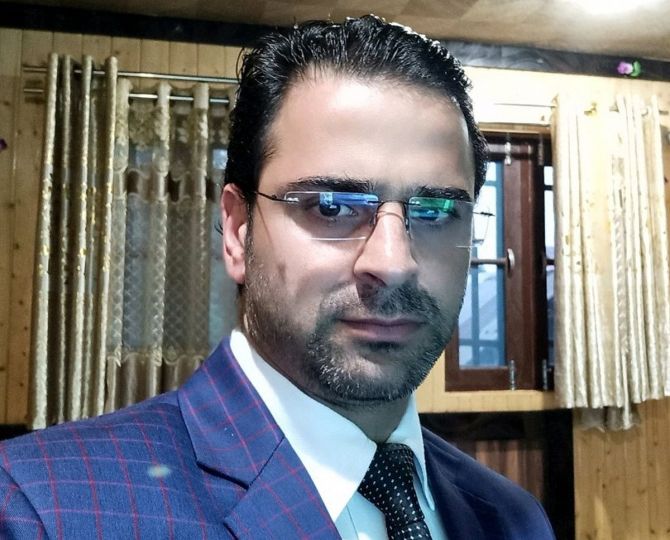 IMAGE: Advocate Babar Qadri, who used to appear on TV debates and write opinion pages for local newspapers, was not liked by the separatist circles. Photograph: Kind courtesy @BabarTruth/Twitter

The ultras fired upon advocate Babar Qadri at his Hawal residence around 6.25 pm from close range before fleeing the spot, a police official said.

Qadri, in his early 40s, was rushed to the SKIMS hospital, where doctors declared him 'dead on arrival', according to the official.

The advocate, who used to appear on TV debates and write opinion pages for local newspapers, was not liked by the separatist circles.

Three days ago, he had tweeted a screenshot, urging the police in Jammu to register a first information report against a Facebook user for spreading 'wrong campaign' against him.

'I urge the state police administration to register FIR against this Shah Nazir who has spread wrong campaign that I work for agencies.

'This untrue statement can lead to threat to my life,' Qadri had written in his last tweet.

Qadri's killing comes a day after Bhupinder Singh, a member of the block development council in Khag area of Budgam district, was shot dead by terrorists at his ancestral Dalwash village on Wednesday night.

The National Conference, People's Democratic Party and the People's Conference condemned the killing.

'The assassination of Babar Qadri this evening is tragic & I unequivocally condemn it,' NC vice president Omar Abdullah tweeted.

'The sense of tragedy is all the more because he warned of the threat. Sadly his warning was his last tweet.'

In a statement, the party demanded that the killers of the young advocate be brought to book and 'justice delivered in the murder case immediately'.

'The party expresses heartfelt condolences with the bereaved family.'

In a tweet, the PDP 'vehemently' condemned Qadri's killing, saying 'mournings are a constant feature in every Kashmiris life'.

People's Conference leader Sajad Lone said Qadri was yet another victim of conflict.

'One more Kashmiri falls to bullets,' he tweeted. 'My thoughts with the family.'