A possible terror attack was averted by alert personnel of the Jammu and Kashmir Police early on Friday when they intercepted a truck, being driven by the cousin of the 2019 Pulwama attack bomber, near Jammu in which three Jaish terrorists were hiding, officials said. 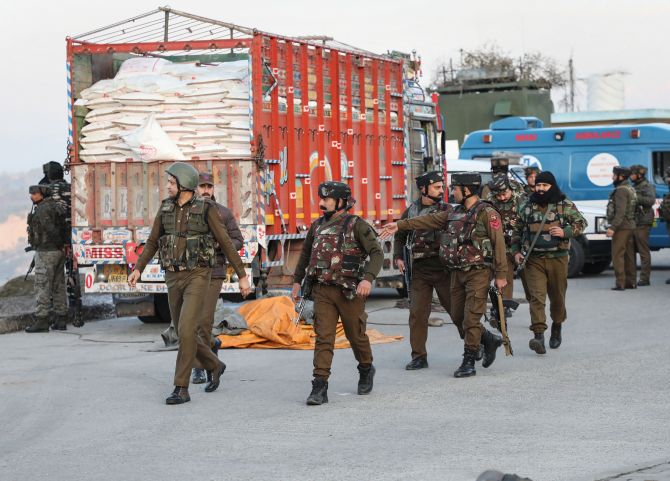 IMAGE: Security personnel walk past the Srinagar-bound truck in which a group of 3-4 terrorists were travelling, on the Jammu-Srinagar national highway, on Friday. Photograph: PTI Photo

Around 5 am, a truck bearing a registration number of Pulwama in South Kashmir was intercepted at Bann Toll Plaza near Nagrota, about 28 km from Jammu city.

The driver and the cleaner of the truck escaped when the truck was stopped by police and Central Reserve Police Force personnel.

But the occupants opened fire at the joint team, injuring a policeman, police said.

The security personnel killed a terrorist in retaliatory fire but two others managed to escape to a nearby forest area.

A police party chased the terrorists and they were also neutralised, police said.

The terrorists belonged to Pakistan-based Jaish-e-Mohammad, they said.

A large quantity of arms and ammunition was recovered from the terrorists, which included five AK rifles, one US-made snipper rifle, wire cutter, codex wire and deadly explosive RDX.

As security forces were engaged in the gunbattle with the terrorists, a police team started looking for the driver, his helper and another person who had escaped from the encounter site. Eventually, they all were arrested. 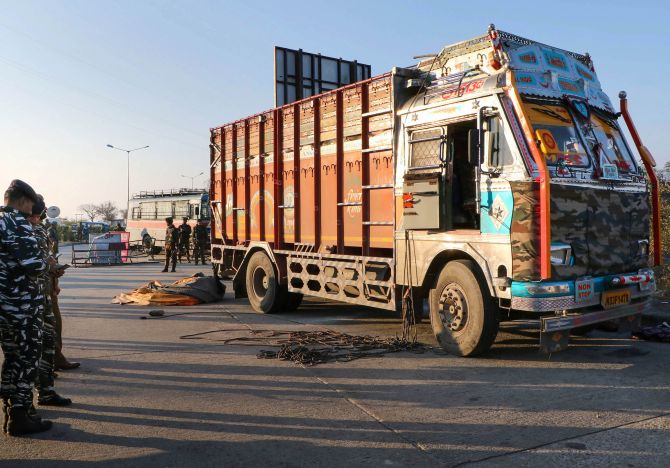 IMAGE: Terrorists hiding in the truck opened fire at a police team near a toll plaza triggering a gunfight in which three ultras were killed and a policeman injured. Photograph: PTI Photo

"The truck driver (the main handler) was identified as Sameer Dar of Pulwama. His brother Manzoor Dar was killed in 2016. He is cousin of Adil Dar," Director General of Police Dilbag Singh told PTI.

Adil Dar, who belonged to the JeM, had rammed an explosive-laden SUV into a bus carrying CRPF personnel in Lethpora area of Pulwama district on the Srinagar-Jammu Highway, killing 40 troops, in February last year.

Sameer, conductor Asif and another over ground worker (OGW) are being interrogated, Singh said.

Sameer was sent to joint interrogation centre where he was being questioned by several security agencies' personnel and during his initial questioning he claimed that the terrorists had freshly infiltrated and and that he had picked them up near Hira Nagar, police said.

Singh said Dar picked up the terrorists around 2 am in the Dayala Chak area of the Hiranagar sector of Kathua district after they crossed into this side from across the International Border (IB).

The officials suspect that the terrorists might have planned to carry out attack at vital installations as well as security camps along the nearly 300-km highway as they were carrying wire cutters and bulletproof jackets.

The Jammu-Srinagar highway was closed as the entire forest belt was cordoned during the gunbattle, they said. The traffic was resumed at 2 pm.

The truck was carrying polyvinyl and a cavity was created inside it to hide the terrorists, the officials said.

All schools and colleges were closed in Udhampur district as a precautionary measure, they said. 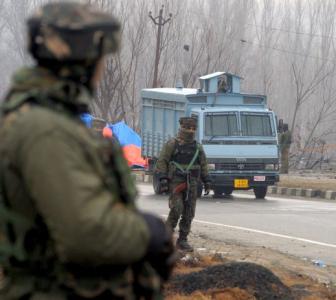 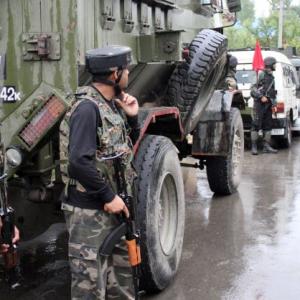