Terrorists barge into house and abduct man in Jammu and Kashmir 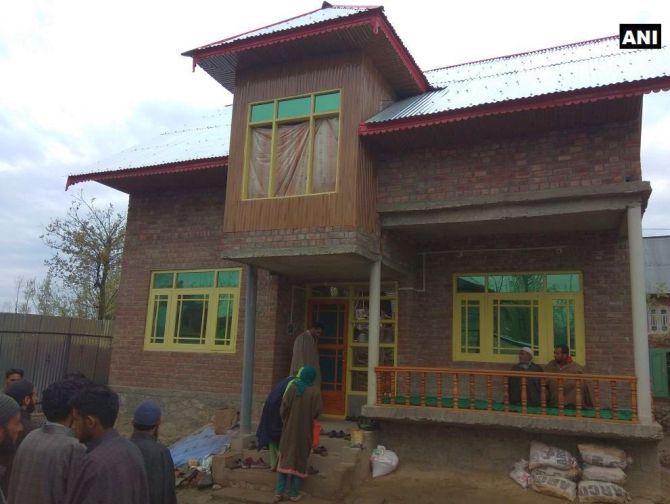 IMAGE: The house in which the terrorists of Lashkar-e-Tayiba barged into. Photograph: ANI/Twitter

Terrorists abducted two civilians and injured three of their relatives in Bandipora district of Jammu and Kashmir, police said on Tuesday.

The body of one of them was later found by the police.

Suspected terrorists of Lashkar-e-Tayiba barged into the house of one Farooq Ahmad Parray at Hajin in Bandipora district on Monday night and opened fire on inmates,  a police spokesman said.

"The terrorists used knives to  cause grievous injuries to wife, daughter and brother of Farooq," he said.

"Muzzafar Ahmad Parrey was killed ruthlessly by terrorists last summer. He was first decapitated and then his body was thrown into the river," he added. PTI MIJ SNE

The terrorists also abducted Naseer Ahmed Parray alias Muntazir, son-in-law of the house owner from there, the spokesman said.

"The body of Muntazir has been recovered," the spokesman said.

"Efforts are on by the police to trace out the (other) abducted person," he added.

The injured persons have been shifted to a hospital for treatment.

"Muzzafar Ahmad Parrey was killed ruthlessly by terrorists last summer. He was first decapitated and then the body was thrown into the river," he added.

Meanwhile, the Pakistan army on Tuesday targeted forward posts along the Line of Control in Jammu and Kashmir’s Poonch district with mortar shells.

The Indian Army retaliated strongly, effectively and proportionately to the unprovoked ceasefire violation, he said.

Pakistani troops have violated the ceasefire along the LoC and the IB over 650 times this year.