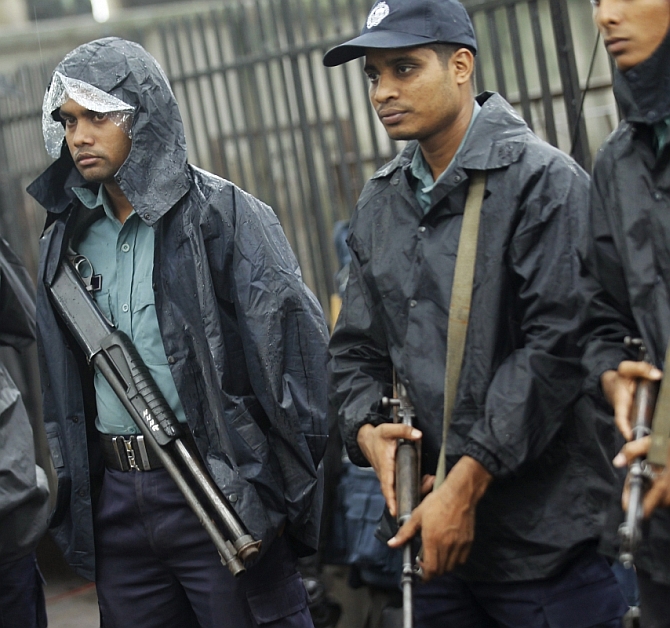 Bombs exploded near an Eid prayer gathering in Sholakia in northern Kishoreganj district where at least 200,000 people had gathered, the police said.

The police said one constable was dead and at least 13 others were injured. A second policeman later succumbed to his wounds on way to hospital in neighbouring Mymensingh.

Jharna Rani Bhoumik, a housewife, was also killed as she was hit by a stray bullet that penetrated her hut, officials said.

One suspected attacker was also killed in the exchange of fire with police at the blast site as roads in the area were cordoned off.

The police said that two of the attackers have been held while media reported the arrest of three persons.

Machetes were seized from the suspected assailants. Local reports said six to seven people led the attack with sharp weapons on policemen when they were frisking people entering the Eidgah ground.

Kishoreganj ASP Obaidul Hasan said the blasts spread panic among thousands who were beginning to gather near the ground, but the prayers were not disrupted, bdnews24.com reported.

"That was probably a crude bomb. The facts are still unclear," he said.

The police did not reveal the identities of the arrested attackers. No group has claimed responsibility for today's attack. The incident comes close on the heels of last week's

deadly attacks on a cafe in Dhaka in which 22 people, including a 19-year-old Indian girl, were brutally slaughtered by Islamic State militants.

The Islamic State terror group on Wednesday issued a new chilling video warning the Bangladesh government of more attacks in the country and across the world until Shariah law is established globally, saying last week's gruesome attack here was just "a glimpse".

The video message believed to be issued from Raqqa, the stronghold of the terror group in strife-torn Syria was released on YouTube.

NSG team to travel to Bangladesh

A special team of National Security Guard officers will be travelling to Bangladesh to "analyse and study" the bombings at an Eid prayer gathering on Thursday and the recent terror siege at a high-end restaurant in the neighbouring country.

Officials said the team of NSG officers have been authorised by the government to travel to Dhaka after the Special Forces establishment in Bangladesh approved the formers' request to visit the spots of the terror attacks for a first-hand understanding of the situation.

The team, which includes NSG experts in post-blast analysis and counter-terror operations, will study the July 1 incident where terrorists laid siege at a bakery and killed 22 and also analyse today's bombings in Kishoreganj area in Bangladesh.

They said NSG wanted to study the scenario, in coordination with their Bangladeshi counterparts, as getting an insight into them will not only enhance counter-terror cooperation between the two neighbours but also add value to the operations knowledge of the elite commando Force.

NSG is the federal counter-terror and counter-hijack commando action force of the country that was raised in 1984. The team, it is understood, will be in Dhaka over the coming weekend and will gather leads for "analysis and study" of the two terror incidents.