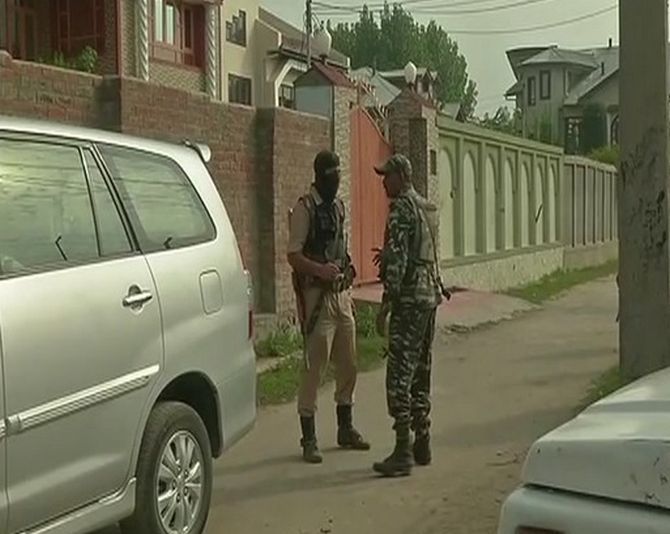 Swooping down on few traders and alleged hawala dealers, the National Investigation Agency on Wednesday carried out searches at 27 places in various parts of the Valley and Delhi and seized nearly Rs 2.2 crore in cash in raids relating to probe into terror-funding activities in the state.

During the operations, that began in the morning, houses and business establishments of those suspected of channelising funds to fuel secessionist and anti-India activities were searched, an NIA spokesman said.

“During the searches, cash amounting to approximately Rs 2.2 crore were recovered,” he said.

The spokesman said various digital devices including laptops, mobile phones and hard drives have also been seized during the searches.

Diaries pertaining to contacts of hawala operators/traders, ledger books containing accounts of cross-border Line of Control trade of various trading companies have been recovered. Some details of bank accounts of Jammu and Kashmir were also recovered, the spokesman said.

Travel documents of some entities indicating their visits to the UAE have also been recovered, he said, adding that some of the suspects were being questioned about the recoveries made from them.

The raids come a day after the NIA arrested two persons, including a freelance photo-journalist, who allegedly indulged in stone-pelting and mobilising support against the security personnel through social media.

These raids and arrests by the NIA is part of its investigation in a case registered on May 30 in which the leader of the Pakistan-based Jamaat-ud-Dawa and banned terrorist outfit Lashkar-e-Tayiba, Hafiz Saeed, was named as an accused.

The NIA has arrested seven persons in the case of alleged funding of terror and subversive activities in the KashmirValley to fuel unrest there.

The case was registered for raising, receiving and collecting funds through various illegal means, including hawala channels, for funding such activities.

It also included causing disruption in the Valley by stone-pelting, burning schools, damaging public property and waging war against India.

This is for the first time since the rise of militancy in Jammu and Kashmir in the early 1990s that a central probe agency has conducted raids in connection with the funding of terrorist and separatist groups.

The searches were also part of NIA probe into the alleged irregularities in cross-LoC trade. In this connection, the NIA had carried out searches on traders at trade facilitation centres at Salamabad in Kashmir region’s North Kashmir’s Baramulla district and Chakan-da-bagh in Poonch district of the Jammu region.

During its probe, the NIA found that after clothes and ‘dupattas’, California Almonds has emerged as the new product in cross-LoC trade in Jammu and Kashmir that is being used a mode of terror-funding.

According to the cross-LoC trade agreement between India and Pakistan, products grown in both sides of Jammu and Kashmir will be exchanged under barter system. The products included ‘badam giri’ that is grown in parts of Pakistan-occupied-Kashmir.

The traders from PoK were sending and receiving California Almonds and it is alleged that the money was used for funding of terror groups in the state.

The NIA, in its FIR, had alleged that there was a large scale transfer of funds from Pakistan to India through the import of California Almonds (badam giri) via the cross-LoC trade mechanism through the trade facilitation centres located at Salamabad and Chakkan-da-Bagh.