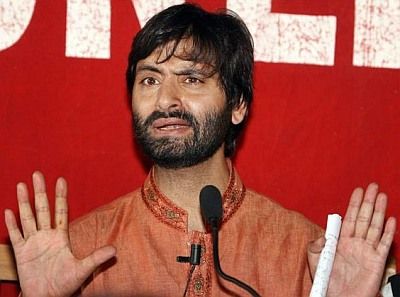 The National Investigation Agency (NIA) on Friday filed a supplementary chargesheet before a Delhi court against Jammu and Kashmir Liberation Front chief Yasin Malik and four other Kashmiri separatists, including a woman accused Asiya Andrabi, for allegedly conspiring to wage a war against the central government by carrying out terrorist and secessionist activities.

The charge sheet, running into 3,000 pages, claimed that Pakistan High Commission supported the separatists through transfer of funds via financial conduits to create unrest in the Kashmir valley.

The case relates to alleged terror funding in 2017 in the valley and involves Jamaat-ud-Dawah (JuD) chief Hafiz Saeed, the 2008 Mumbai terror attack mastermind based in Pakistan.

The court has put up the matter for taking cognisance of the charge sheet on October 23.

The offences for which the accused were chargesheeted fall under Sections 120B (criminal conspiracy), 121 (waging war against government of India), 121A (conspiracy to wage war) and 124A (sedition) of the Indian Penal Code and relevant provisions of the Unlawful Activities (Prevention) Act, 1967.

The NIA stated later in a press release that during the investigation, searches were conducted at nine locations in J&K and 400 electronic devices along with 85 incriminating documents were seized.

It said the role of the Pakistan High Commission in supporting the separatist and other networks through transfer of funds via financial conduits and in providing directions to continue the unrest in the Kashmir valley has been clearly established during the investigation.

About 125 witnesses were examined during the probe, it said.

The NIA said investigations revealed that the five accused have hatched conspiracy by collaborating with each other to form various protest calendars and action plan in order to launch violent agitation, 'hartaals', systematic 'bandhs' and large scale economic shut-down in order to cripple the administrative machinery and to create disaffection towards the administration.

The probe revealed that the Hurriyat leaders, terrorists and the stone-pelters carried out terrorist attacks and orchestrated violence, stone-pelting and other secessionist activities in the Valley, NIA said.

There was recovery of various SMSes, Chats, e-mails, WhatsApp and videos clearly indicating the nexus between the already charge-sheeted accused and the five accused, the agency said.

"In the videos they are seen, exhorting general public for illegal acts, sympathizing with the militants and seeking direct support from Pakistan.

"Various incriminating chats and e-mails have been recovered from the e-mail accounts of Yasin Malik and Shabir Shah wherein description of receipt of funds from Pakistan and various other countries have been revealed.

"It has also been found that Yasin Malik has been getting funds from foreign countries through hawala channels for causing unrest and insurgency in Kashmir," it said.

According to the NIA, Shah had received Rs 10 lakh from hawala operator Zahoor Ahmad Shah Watal, a co-accused in the case.

Besides, the money was also sent to the banned outfit Dukhtaraan-e-Milat of which Andrabi was the chief, NIA said.

The agency had on June 4 arrested Shah, Andrabi (chief of banned outfit Dukhtaraan-e-Milat) and Bhat in connection to the case.

NIA had filed a charge sheet in January 2018 against Saeed, Hizbul Mujahideen chief Syed Salahuddin and 10 Kashmiri separatists for allegedly funding terror and secessionist activities in the valley.

It had said the conspiracy was hatched with active support, connivance and funding from terrorist organisations based in Pakistan and its agencies to achieve their objective of secession of the Jammu and Kashmir by waging war against the Indian government.