The case is being tried in the Anti-Terrorism Court since 2009. There has hardly been any case in any ATC in Pakistan that is pending for over nine years. 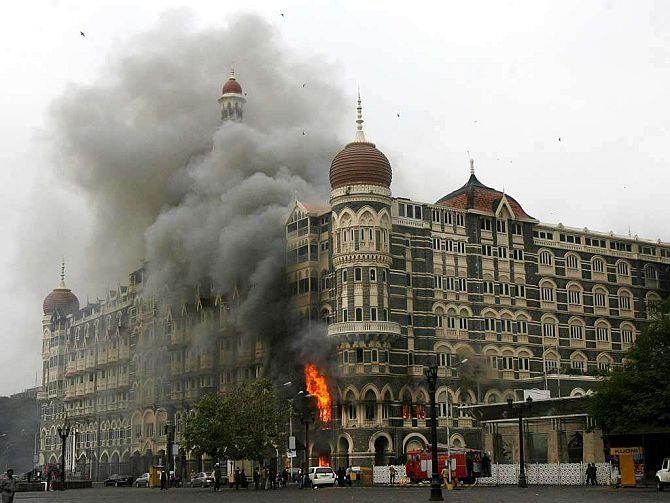 As India marked the 10th anniversary of the 26/11 carnage on Monday, the trial of seven Lashkar-e-Tayiba members facing charges of planning and executing the ghastly Mumbai terror attacks is still being dragged on in a Pakistani anti-terror court though the Islamabad high court in 2015 directed that the case should be wrapped up in two months.

The attack mastermind Zaki-ur Rehman Lakhvi, the operations commander of the LeT, has virtually secured his acquittal with the Pakistan government indicating no plan to challenge his bail in the Supreme Court.

The six other suspects have also 'bright chances' of acquittal with their trial witnessing bizarre twists and turns like frequent change of judges and murder of a prosecutor.

A total of 166 people died and over 300 were wounded in the strikes, which lasted till November 29.

Nine of the attackers were killed by police, while lone survivor Ajmal Kasab was captured and hanged after a trial in India.

There has been a realisation in Pakistan, especially among politicians, that the attacks had demolished all the past efforts to build friendly relations between the two neighbours.

However, there are divergent views on whether punishing the culprits in Pakistan will help restore ties between them.

But like ousted premier Nawaz Sharif, questions are being asked in Pakistan 'why trial is not being completed?'

When PTI sought a reaction from the Pakistan's Foreign Office on the status of the 26/11 trial, the FO spokesman Mohammad Faisal refused to comment in detail and just said, "It is sub judice."

Pakistani prosecutors are, however, quick to blame India for the delay.

Chief prosecutor Chaudhry Azhar told PTI the case can be concluded in a week if India sends 24 witnesses to Pakistan for recording of their statements and other evidence.

"The Mumbai case will take not more than a week to conclude if India allows Pakistan to examine the boat on which the terrorists travelled to reach Mumbai and also send its witnesses here for recording of their statements," he said.

Azhar, who is also Federal Investigation Agency special prosecutor, further said India will have to cooperate with Pakistan if it wants logical conclusion of the case.

"Crime had taken place in Mumbai and onus is on India to provide full evidence to Pakistan. The Indian government has not yet either clearly refused to send its witnesses to Pakistan or allow us to examine the boat there. If it refuses, the benefit will go to the suspects and the case will be over," he said.

When asked why the government has not challenged the bail granted to Lakhvi, he said there was no strong evidence against his involvement.

Lakhvi walked free from jail in April 2015 after securing a bail from the trial court, while the six other suspects are in Adiala jail in Rawalpindi.

Abuzar Peerzada, another prosecutor in the case, said the hearing of the case in the Anti-Terrorism Court (ATC) is being held on regular basis and the next hearing is on November 28.

When asked about any possible time frame for conclusion of the trial, he said: "No...it is very difficult to give any time frame...as it is not an ordinary trial (involving two countries)."

A lawyer associated with the case, requesting anonymity, said: "Since both Pakistan and India's interests are involved in this case...this is more of a political case than a legal one. And a 'political case' has no time limit (for conclusion)."

Raja Rizwan Abbasi, a counsel for Lakhvi and other six suspects, was reluctant to talk to PTI when contacted.

However, a lawyer close to him said the defence is not filing a bail petition of the six suspects as it is hoping that since enough time has passed they have 'bright chances' to secure acquittal.

"The defence lawyers are optimistic about acquittal of their clients. Therefore, they are not moving their bail plea," he said.

Azhar, however, is of the view that they may get benefit only if India does not send its witnesses and other evidence.

The case is being tried in the ATC since 2009. There has hardly been any case in any ATC in Pakistan that is pending for over nine years.

"It appears that the state is not in hurry to decide this case since the matter is related to its arch-rival India," a senior lawyer said.

"Dilatory tactics by the defendants, frequent change of trial judges (at least nine times), assassination of the case prosecutor and retracting from original testimony by some key witnesses have been serious setbacks for the prosecutors," he said.

Like many others in Pakistan, Khosa too believes the case 'will not be over soon'.

Earlier in an interview to Dawn newspaper, ex-premier Sharif had questioned, "Should Pakistan allow militants/non-state actors to cross the border and kill 150 people in Mumbai?...Why can't we complete the trial?" remarks that got him into trouble.

M Zulqernain in Lahore
© Copyright 2022 PTI. All rights reserved. Republication or redistribution of PTI content, including by framing or similar means, is expressly prohibited without the prior written consent.