Chairman of the legislature committee probing the porngate episode involving three ruling BJP MLAs in Karnataka on Thursday said eight to ten other legislators had also watched sleazy clips in the assembly.

Shrishailappa Bidarur, however, indicated these MLAs would not be summoned as it's not part of the terms of reference of the panel.

Bidarur told media persons that the committee would submit its report to Speaker K G Bopaiah by March 20.

"That may be eight to ten", Bidarur said when asked how many more MLAs had watched the adult content in the assembly.

"If necessary", Bidarur said when asked if these eight to ten MLAs would also be issued notice for deposition but later indicated it was unlikely, pointing out that the panel's terms of reference  concerned "about only these three people".

The panel on Thursday called two top officials of the law department for consultations with regard to legal aspects of the case and "what can be recommended", he said.

Bopaiah had constituted a seven-member House panel, comprising four members from BJP, two from the Congress and one from  JDS to probe the episode, but the opposition had boycotted the committee alleging the move is an exercise to cover up the scandal.

The have maintained that there was no need for probe as the three MLAs have admitted to their actions.
Source: PTI© Copyright 2021 PTI. All rights reserved. Republication or redistribution of PTI content, including by framing or similar means, is expressly prohibited without the prior written consent.
Related News: BJP MLAs, Shrishailappa Bidarur, Bopaiah, CCTV, Lakshman Savadi
Print this article
Parkash Singh Badal to be sworn as Punjab CM on Mar 14 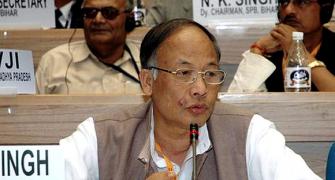 Election 2012: These men are back with a BANG!
Porngate: Disgraced ex-ministers reply to show cause notice