Temple not on people's agenda in Ayodhya

People are more interested in development related issues than the temple, which has ceased to be a talking point in the temple town, reports Sharat Pradhan

The much-debated Ram temple is clearly not on the agenda of the masses that made a beeline at polling booths in the ancient Hindu temple town. Ayodhya is one of the key locales of the 55 constituencies that went to poll in the first phase of the seven-phased Uttar Pradesh state assembly elections on Wednesday.

Significantly, people seemed to show much more interest in development related issues than the temple, which has ceased to remain a talking point even among the saffron clad sadhus who dot every street and lane of Ayodhya.

"The temple is very much in place and I am sure one fine day we will also have a grand structure, but what we need is better roads, cleaner streets, brighter lighting and improved civic amenities in this town," said 30year-old Vishambhar Das, a saffron clad sadhu, who was barely 10 when the 16th century Babri Mosque was pulled down by Hindu zealots.

"Except for lip service, the people of Ayodhya have not received anything concrete in all these years. Yes, the only thing visible is the wealth that successive leaders have amassed in the name of Ayodhya," he said, while stepping out of a crowded polling centre behind Ayodhya's famous Hanuman Garhi temple. "That is the reason I chose to vote for the candidate who was least corrupt," he added, while refusing to divulge which party he considered as the lesser evil.

Seconding Das' viewpoint, another priest, Mukesh Shastri, who was closely associated with the Hanuman Garhi temple said, "Times have changed; people's perceptions have changed; we have enough rhetoric but what the people of Ayodhya are looking for is comprehensive development."

"Some work had been done, but there is need for much more to facilitate tourists on whom the economy of this city depends," said Shastri.

Thirty-eight-year-old Karori Mal, who runs a small electrical goods shop in Ayodhya felt that people had marched far beyond the temple issue. "After all, the temple will not give us food. Trouble over the temple has often badly affected the livelihood of people living here," he said.

The trader does not deny his respect for Lord Ram and for a temple devoted to him, but he is not willing to compromise the future of his family for the sake of erecting a magnificent temple in place of the makeshift Ram temple that stands on the debris of the medieval mosque.

Many were not impressed by the rhetoric raked up by Bharatiya Janta Party patriarch Lal Krishna Advani, who was here earlier this month to campaign for party MLA Lalloo Singh, who is seeking a reelection.

Lalloo Singh has both supporters and detractors here.

"Well, we all have deep regard for Lalloo Singh because he is easily accessible and there can be no denying that he has given Ayodhya better roads and a couple of other things," said Ramji, an electrician.

However, 25-year-old physically challenged Jagram Yadav, who had come to the polling booth in his ramshackle tricycle said, "It was time for change as Laloo Singh had failed to live up to the expectations of the people. Even during the BJP regime, when he could have done lot of work, he failed to deliver."

However, only time will tell which way the wind has blown on a damp and chilly day that may change the political destiny of this town that has so far lived largely in the name of a temple, which has remained an el dorado for the locals for whom it is no more any issue. 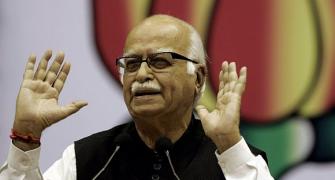 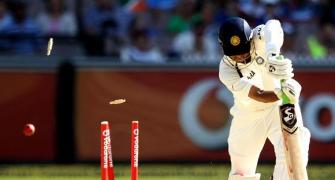 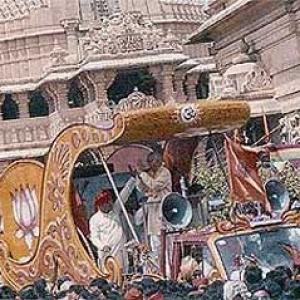 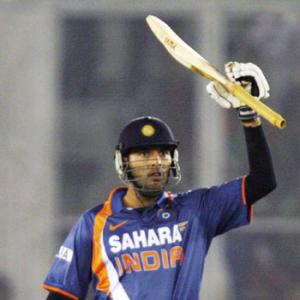 Yuvraj has cancer, undergoing chemotherapy in US