TEJAC has demanded that the government immediately withdraw the Essential Services Maintenance Act enforced in certain departments as well the order of 'no-work, no-pay',

besides withdrawal of all police cases booked against striking workers in the last 30 days and an inquiry into the police action against JAC president K Swami Goud.

But the main demand of the TEJAC is creation of Telangana state, for which they have been on an indefinite strike since September 13.

Let them call off the strike first and come for discussions so that we can consider their demands," state ministers Danam Nagender and M Mukesh Goud, who were part of the Cabinet Sub-Committee, told reporters at the end of the meeting.

When pointed out that the JAC was not ready to attend any further talks with the government without their demands being conceded, they questioned, "How can a  decision be taken without a discussion?"

The chief minister told his cabinet colleagues that no cases were booked so far under ESMA, while the order 'no work, no pay' was implemented on the directions of the high court.

"We can't take any decision on our own on withdrawing GO 177 (no work, no pay). Police cases and other issues can be looked into later," a minister quoted Reddy as saying.

Meanwhile, Danam appealed to Telangana Joint Action Committee to postpone the rail-roko planned for October 15, 16 and 17 as Group-2 government services recruitment examinations are scheduled to be held in the state on 15 and 16.

"As many as two lakh candidates from Telangana districts will appear for the examinations. In their interests, the rail-roko agitation should be put off," the labour minister said.

"When they could postpone the agitation to serve their political interest because of the bypoll in Banswada, why can't they put it off in the interest of lakhs of students?"

Meanwhile, talks held by Secondary Education Minister K Parthasarathy with managements of colleges to get the educational institutes reopened failed.

The managements remained adamant on their stand that they would continue with the strike till the demand for creation of Telangana state was conceded.
Source: PTI© Copyright 2020 PTI. All rights reserved. Republication or redistribution of PTI content, including by framing or similar means, is expressly prohibited without the prior written consent.
Related News: TEJAC, Kiran Kumar Reddy, Danam Nagender, ESMA, JAC
SHARE THIS STORY
Print this article 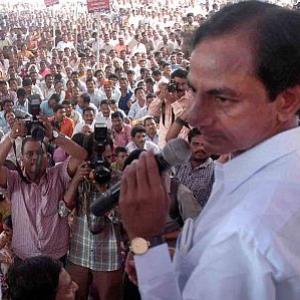