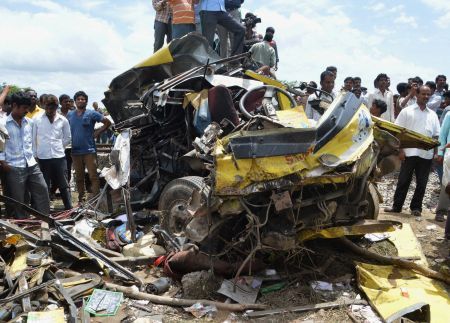 11 students injured in the bus-train collision at an unmanned railway crossing in Telangana’s Medak district continue to battle for their life on Friday even as the district authorities and police have begun an inquiry into the mishap.

Telangana Health Minister T Rajaiah, who visited the private hospital in Secunderabad where 20 students injured in the mishap were undergoing treatment, said the condition of four students remains critical and seven others are on ventilator. Nine are out of danger.

Sixteen persons -- 14 school children, the driver of the private school bus and the cleaner -- were killed and 20 students were injured as a passenger train hit their bus at an unmanned railway crossing in Masaipet village on Thursday.

The bus was being driven by another driver as the regular one was on leave. The children, aged between 5 and 15, had been picked up from various parts of Yeldurthy mandal and the bus was on its way to the school in Toopran.

Following an order from Medak district’s in-charge collector A Sharat, the district authorities began an inquiry into the incident and police were also carrying out a separate probe.

“We are collecting documents and records pertaining to the bus manufacturing, driver’s licence among other details from the private school and verifying them and we will prepare a report. A legal opinion will be taken and if there are any violations, we will also book a case against the school management,” Medak District Superintendent of Police Shemushi Bajpai said.

After autopsy of the bodies, the last rites of the deceased were conducted on Thursday night. Most of the victims were from Toopran mandal of the district, the SP said. The Government Railway Police has already booked a case in connection with the accident.

Meanwhile, transport department officials on Friday started conducting inspections and check-ups of school buses in Hyderabad city and across the state. Some buses were seized for operating in violation of rules, a transport official said.

In another development, a petition was filed before the State Human Rights Commission seeking a direction to the SCR to put up gates at all unmanned railway level crossings of Telangana. “The accident occurred due to negligence of railways. Stern action should be taken against all those responsible for the incident in which precious lives of children have been lost. The SCR should also be directed to put up gates at all unmanned crossings,” petitioner Y Soma Raju, a practicing lawyer, said.

Image: Locals stand atop the wreckage of the bus after a train collided into it at Telangana's Medak district. Photograph: PTI photo