In a dramatic about turn, the Andhra Pradesh government has granted permission for Sunday's Telangana march but with some conditions. The march will now be held only on the Necklace Road side of Hussain Sagar and will be confined between 3 to 7 pm.

The decision to grant permission was taken by the government after hours long talks between the Telangana movement leaders and the Telangana ministers.

Senior minister K Jana Reddy, after briefing Chief Minister N Kiran Kumar Reddy told the media that the organisers have given an undertaking that the march will be peaceful.

The talks between the government and the Telangana movement leaders were held in the chambers of the state home minister where several other Telangana ministers were also present.

The chief minister's nod for the march has come as a big relief to the ministers from Telangana who were apprehensive that any confrontation between the police and the Telangana supporters will further alienate them in the region and Congress will face a sever backlash.

Sources said that the march timing was fixed at 3 pm so that the police could get sufficient time between the conclusion of the Ganesh immersion procession and the Telangana protests.

TJAC leader Prof Kodanda Ram said that September 30 was chosen for the march to highlight the decades long struggle of the people of Telangana for a separate state when delegates from all over the world had gathered in Hyderabad for Global Biodiversity Conference starting from Monday.

The government decision has also given a face saver for the Telangana Congress leaders who were on defensive after the Congress high command again back stepped from taking a decision on Telangana issue earlier this week. Still the Congress party was likely to get a tongue lashing from the speakers during Sunday's protest.

The state government has so far maintained that it cannot allow the gathering of lakhs of people in Hyderabad a day before the global United Nation conference.

Top police officials including the state's in charge Director General of Police V Dinesh Reddy said that they were apprehending communal trouble and violence by anti social elements during the Telagnana march.

They pointed out that during the earlier "million march" by the Telangana supporters on the same Tank Bund had led to violence in which several statues of eminent personalities were destroyed.

The intelligence agencies have reportedly warned the state government that if the Telangana Joint Action Committee was allowed to organise the march, the protestors will not disperse and will try to continue their sit in protest for several days to draw the attention of the UN Biodiversity conference form across the globe.

According to the sources, the chief minister told the Telangana ministers that the government cannot take risk of any large scale trouble. But when the ministers insisted, the chief minister gave them the responsibility of persuading the TJAC to move the march venue to some other place, preferably to the outskirts of the city.

But TJAC has rejected the proposal and was adamant of conducting its program only on the Hussain Sagar lake.

Acting DGP ruling out the possibility of permitting the march in the lake area, said that Ganesh immersion will take place in the same lake on Saturday and it was likely to continue even on Sunday.

"Hussain Sagar lake area will remain under control of the police for two days", he said.

Adding fuel to the apprehensions of trouble, some supporters of Telangana attacked newly opened toll plaza on the Outer Ring Road. About 25 activists of Telangana United Front targeted the toll plaza near Nanakramguda and burnt several counters and damaged others.

They poured petrol on the counters and set them on fire. Computers and furniture was gutted in the fire. The police have arrested 14 persons in connection with the incident.

Trouble was also brewing in the Osmania University campus, the hotbed of Telangana movement. For the second consecutive day the students tried to take out procession in support of the march but they were stopped by the police leading to stone pelting and police lathicharge and tear gas shell lobbing. The campus had witnessed similar incidents on Thursday.

The Joint Action Committee of Telangana government employees has also threatened to go on indefinite strike if the government does not permit the march and resorts to threats and repression.

The march has inflamed the sentiments in Telangana and almost all the political parties were supporting it. Apart from the Telangana Rashtra Samiti, Communist Party of India, Bharatiya Janata Party, Telangana Nagara Samiti, the Telanganan MPs of Congress party and Telugu Desam's Telangana Forum have also announced their support to the march.

The Telangana leaders have made representations to the governor, the chief minister, top police officials and even the President for permission but the government has responded with more force.

It has deployed large number of paramilitary forces and closed all the entry points of the city to check the large scale movement of people in to the city. No vehicle was being allowed to enter the city without checking. Security has also been tightened at all the railways stations and at the airport. 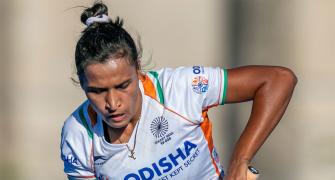 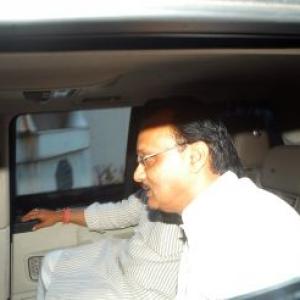 Telangana waits for Congress to make up its mind