The release of NTR Junior's new film Adhurs on Thursday was marred by protests and road blockades in Telangana region as pro-Telangana protestors tried to prevent the screening of the film alleging it was produced by anti-Telangana filmmakers.

The film could not be screened at many places including Adilabad, Karimnagar, Warangal, Mehbubnagar and Nalgonda. It was also stopped in some places in Hyderabad including Kompally.

An unknown caller informed the management of a theatre in Kokatpally that a bomb was planted to prevent the release of Adhurs.

The police had made heavy security arrangements at all theatres where the film was released.

Prasad's IMAX in Hyderabad was focus of attention where large number of policemen were deployed to prevent any untoward incidents of disruption.

But the workers of Telangana Rashtra Samiti and Telangana Janajagruti Samiti staged a rasta roko protest at Charimnar Roads and stopped the film's screening at Odeon theatre.

TJS leader K Kavita had given a call to stop the release of the film as its producer and Telugu Desam legislator Kodali Naani had opposed Telangana state by supporting united Andhra Pradesh.

Four workers of Telangana Joint Action committee were arrested in Suryapeta town of Nalgonda for burning the posters of the film.

Though NTR Junior had made a public appeal not to stop his film saying he did not hold any political ideology on the regional issue and he belonged to all, protestors went ahead with their programme.

Several leaders of the Congress and the Telugu Desam Party from Telangana region however opposed the protests against the film. Two ministers from Hyderabad M Mukesh and D Nagendar charged TRS chief K Chandrasekhara Rao, his daughter K Kavita and other family members with blackmailing the industry and dictating terms.

It has created a feeling of insecurity in the film industry and other residents of the city, Nagendar said.

He announced that he would organise an all-party peace rally in the city to instill confidence in the people.

T Srinivas Yadav and Revanth Reddy of the TDP also criticised the TRS and others for targeting the films.

"You cannot achieve Telangana through such acts," Yadav said.

T G Venkatesh, Congress Member of Legislative Assembly from Kurnool demanded arrest of K Kavita. He alleged that Telangana leaders were using the students as puppets. 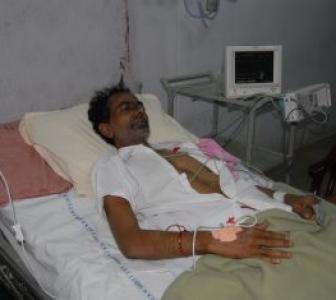 State imposes prohibitory orders in Telangana
We have not joined NDA, says TRS

NTR Jr pleads to save movie from Telangana fury