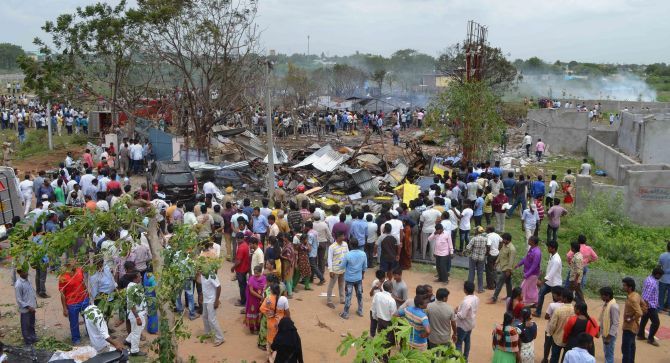 A blaze ripped through a firecracker manufacturing unit on the outskirts of Telangana's Warangal city on Wednesday, setting off a series of blasts that left eight people dead and five injured, officials said.

The cause of the fire that quickly spread to large parts of the factory at Kotilingala village of Warangal, about 150 km north-east of state capital Hyderabad, was not yet known.

He said the exact cause of the blaze and the blasts was being ascertained.

Earlier reports suggested that the blaze could have been caused by an electrical short-circuit. Three of those killed were charred beyond recognition, an official said.

Body parts were strewn across the place, which lay enveloped in soot and stench of burnt flesh.

Many of the deceased were suspected to be women as most workers at the factory were women from nearby localities, District Collector M Haritha said.

Telangana Deputy Chief Minister K Srihari, who rushed to the scene of the tragedy, told reporters that eight people were killed in the incident, while the five wounded were shifted to a government hospital in Warangal. 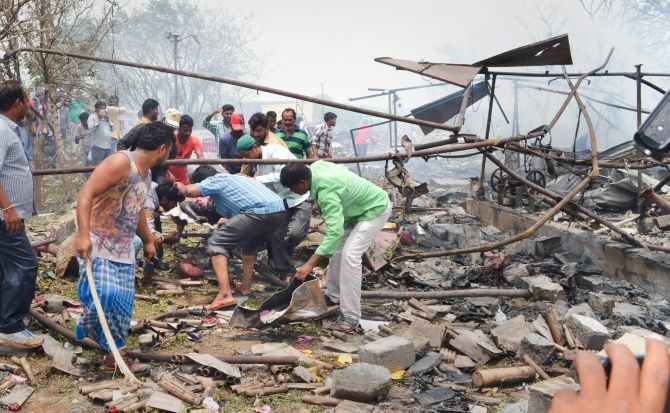 An earlier report quoting Haritha, the Warangal (Rural) District Collector, had said 10 workers were killed and two injured in the incident.

She later clarified the confusion about the death toll was due to the bodies having got dismembered under the impact of the explosions.

"Three persons out of the 10 were charred beyond recognition. The bodies have been shifted to a mortuary for post-mortem and to identify the deceased," she said.

Six fire tenders were engaged to control the leaping flames as plumes of smoke spiralled into the darkened sky.

Firefighters battled for over two hours before the blaze could be put out completely.

Director General of the state's Disaster Response and Fire Services Department M Gopi Krishna told PTI that sparks falling on explosive material from burning electric cables could have set off the blasts.

"However, a probe is under way to establish the exact reason," he said.

The shed over the factory came crashing down under the impact of the explosion, he said. Body parts got flung as far as 100 metres from the scene of the blast, Krishna said, adding rescuers were removing the debris.

Chief Minister K Chandrasekhar Rao has expressed shock over the loss of lives and announced an ex-gratia of Rs 5 lakh to the families of each of those killed, Srihari said.

The deputy chief minister said the government will bear the educational expenses of the children of the deceased and efforts would be made to provide their families 2 BHK houses.

Rao directed the officials concerned to provide adequate medical help to those injured and said the cost of their treatment will be borne by the state government.

Warangal Police Commissioner V Ravinder said records were being examined to ascertain if the unit's licence was still active.

"Stern action will be initiated as per law against those found responsible for the incident," he said.

Meanwhile, some residents of the area claimed compound walls of their houses developed cracks under the impact of the explosions. Some of them demanded that the unit be shifted away from the area.

IMAGES: Injured people being rescued after a major blast at a cracker unit at Kotilingala on the outskirts of the Warangal district on Wednesday. Photograph: PTI Photo