Russian investigators have identified a 17-year-old baby-faced widow of a Caucasus militant as one of the two 'Black Widows' involved in Monday's twin suicide attack in Moscow metro that killed 40 people.

Resident of Daghestan's Khasavyurt district Jannat Abdurahmanova, the teenage widow of Umalat Magomedov  a militant belonging to Daghestani Jamaat, was said to be responsible for the first attack on Lubyanka metro station, Life.ru website reported.

Her husband was killed last year in an anti-insurgency security operation. Several papers have also published the photograph of the couple playing with pistols.

According to Kommersant online, Jannat, spelled Dzhannat in Russian as the language has no letter for 'J' in alphabet, contacted her militant husband on internet, when she was 16.

The death toll has risen to 40 in the twin metro attacks as the investigators are waiting for the DNA tests of the second female bomber, widely believed to be 20-year old Markha Ustarkhanova, widow of Chechen militant Said-Amin Khizirov.

Khizirov was killed last October in security operation to avert assassination of the pro-Moscow Chechen President Ramzan Kadyrov.
Kommersant daily had reported yesterday that Ustarkhanova had disappeared from her home and joined the militants after contacting them on internet and her parents had lodged a report with the police, which was looking for her as a "missing person".

In a parallel development the police have found the body of a 22-year old girl from Daghestani Kizlyar on a highway near the town of Mytishi north of Moscow.

Quoting sources in investigation committee of the prosecutor's Office, ITAR-TASS said the body of the girl had no signs of violence, but there were marks of injections. The investigators denied media reports about that the girl was carrying papers in Arabic language.

"Only her identity card was found, which showed that she was resident of Kizlyar," the investigators said.
Kizlyar, which become the scene of second twin suicide attacks after Moscow on Wednesday, is close to the administrative border with restive Chechnya and is used for the rebels for travelling to Moscow.

The two female suicide bombers had also come to Moscow by bus on the same route and were identified by the bus driver and co-passengers who travelled with them on a 1600-km long journey. 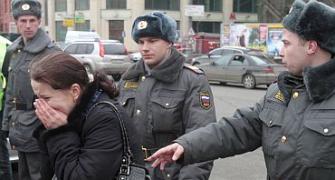 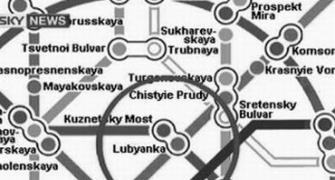 'Emirate of Caucasus behind Moscow blasts'