An oil tanker carrying crude from Kuwait to India burst into flames off the eastern coast of Sri Lanka on Thursday, leaving one of its 23 crew members missing and another injured, a navy spokesman said. 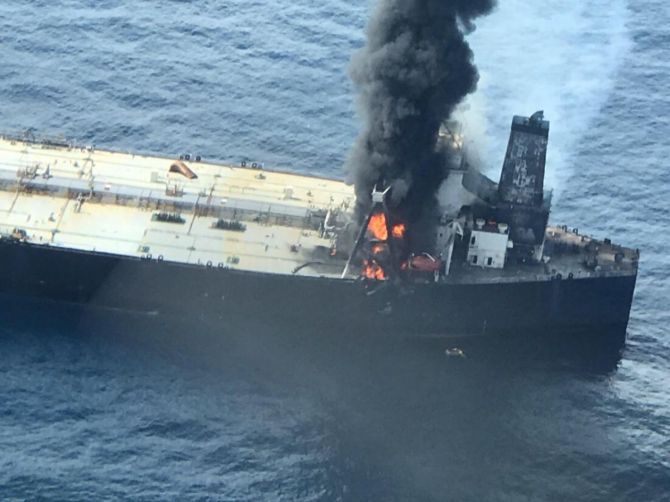 The Panama registered tanker New Diamond was carrying 270,000 metric tonnes of crude oil from Kuwait to India when its engine room caught fire off the coast of Sangamankanda in the eastern district of Ampara, Sri Lankan Navy spokesman Capt Indika Silva said.

The Navy said that one Filipino crew member remains missing, while they have rescued another Filipino national, a third engineer, who was injured.

He was sent to hospital in Kalmunai in the eastern province.

The Navy also rescued the captain of the tanker and a crew member whose nationalities have not been given.

MV Helen, a vessel sailing in the area, rescued 3 Greeks and 16 Filipino crew members from the distressed vessel.

The Navy spokesman said that at least four ships had been dispatched to carry out the rescue operation.

The naval ships were dispatched from the eastern port of Trincomalee and the southern port of Hambantota.

The Indian Coast Guard also pressed into action three of its ships and a Dornier aircraft after the Sri Lankan Navy sought assistance to control the fire onboard the oil tanker.

In a swift sea and air coordinated Search and Rescue (SAR) operation, the Coast Guard said it immediately diverted ICG Ships Shaurya, Sarang and Samudra Paheredar, besides a Dornier aircraft for the firefight on the oil tanker.

Two Russian anti-submarine warfare ships which were anchored at Hambantota Port since August 31 were also dispatched to the area to douse the fire, the spokesperson said.

Silva said there were 24 crew members on board 'New Diamond' when its engine room caught fire. The Marine Environment Protection Authority (MEPA) said the oil tanker was carrying 270, 000 Metric Tonnes of oil from Kuwait to India.

MEPA Chairperson Dharshani Lahandapura said that 100,000 liters of water was provided to the Naval vessels to try and douse the fire.

The crew members, except two, have left the tanker and are staying on rescue craft at sea, according to Russia's official Tass news agency.

At the time the fire broke out, the Panamanian-registered ship was about 38 nautical miles (70 kilometres) east of Sri Lanka. 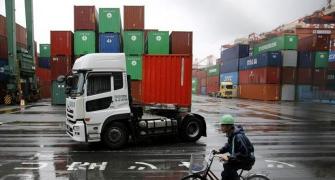