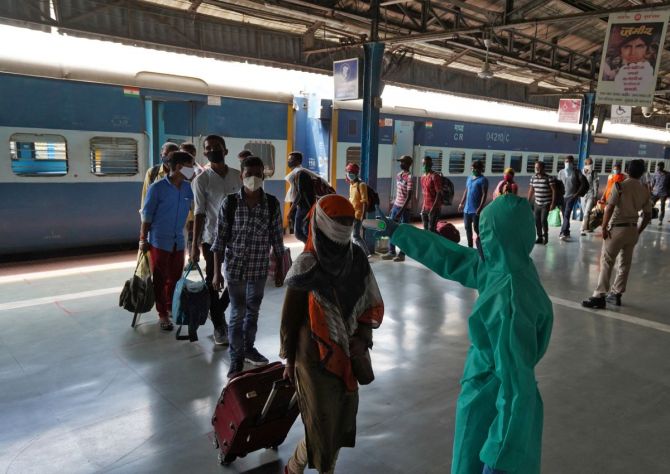 Southern Railway however clarified that the issue was the result of a particular user selecting Hindi as the preferred language while registering in the IRCTC website.

'Language is an option in e-ticketing,' a Southern Railway release said.

Earlier, DMK MP from South Chennai, Thamizhachi Thangapandian, took to Twitter to share a screenshot of the SMS purportedly received in Hindi.

'The #GovernmentofIndia despite its promises to not impose Hindi, continues to impose the language through insidious means. Stop forcing Hindi on the non-Hindi speaking states,' she said.

In a series of tweets, she tagged the Railway Ministry and urged it to take urgent steps to ensure non-Hindi speakers are also able to access the IRCTC services.

"They are not respecting people's feelings and are repeatedly imposing Hindi," she said in an apparent reference to the Centre.

"People (in TN) cannot read what is mentioned in the SMS since it is in Hindi," she told reporters at the airport in Chennai and warned of 'serious repercussions' due to such incidents.

PMK founder Dr S Ramadoss, whose party is an ally of the ruling BJP at the Centre, alleged that SMSes for e- tickets in Tamil Nadu are 'being sent in Hindi for the last two days'.

'This is a planned imposition of Hindi on non-Hindi speaking people. The Railways should stop this,' he said in a tweet.

He demanded action against those behind this and urged that all Central government related announcements in Tamil Nadu must be released only in Tamil and English.

Meanwhile, Southern Railway, which earlier 'flagged' the matter to the Indian Railway Catering and Tourism Corporation Ltd (IRCTC), the authorised e-ticketing agency, said that in the case on hand, the person had selected Hindi as the preferred language while registering on the IRCTC portal.

'Language is an option in e-ticketing...it is clarified that while registering the details under the section titled 'profile' in the IRCTC website, one needs to indicate the preferred language-- either English or Hindi, to enable receipt of ticket related messages in the language of one's
preference,' it said.

Southern Railway also requested users to choose the correct language option while registering their profile in the IRCTC website for booking e-tickets.

Alleged Hindi imposition has been a sensitive issue in Tamil Nadu for long.

The DMK had successfully heralded an anti-Hindi agitation in the 1960s, before coming to power for the first time in 1967.

Even recently, both the ruling All India Anna Dravida Munnetra Kazhagam and DMK have opposed the Centre's New Education Policy (NEP) 2020, with the former having rejected the three language formula proposed in it.

Tamil Nadu Chief Minister K Palaniswami had announced that his government will only follow the two-language system--Tamil and English.