Taiwan on Sunday expressed gratitude to India and several other countries for their calls for exercising restrain and avoiding unilateral actions to change the status quo in the Taiwan Strait in the face of China's belligerent military posturing following United States House Speaker Nancy Pelosi's visit to the island. 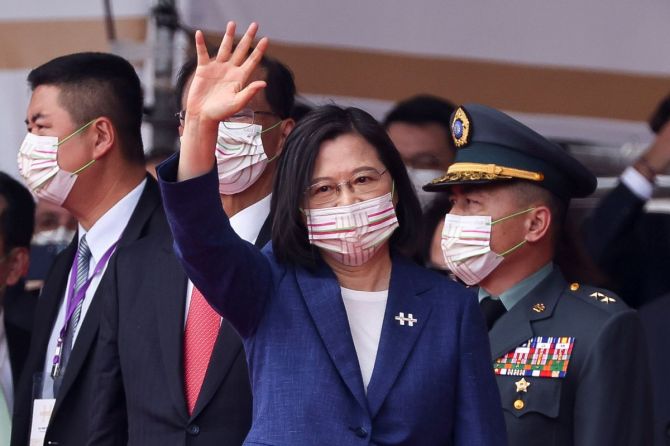 With Beijing launching a diplomatic overdrive seeking reiteration of support by countries across the world for its 'One China' policy in the backdrop of the current crisis, Taiwan said it is entitled to maintain relations with other nations.

Pelosi's visit to Taiwan around 10 days back drew a furious response from China which launched its biggest-ever military exercise around the self-governing island and blamed the United States for escalating the tension in the region.

In a statement, Taiwan's representative office in New Delhi said the government of Taiwan will continue to enhance its self-defence capabilities while maintaining close communication and coordination with the US, Japan and all other like-minded nations including India to jointly preserve the rules-based international order.

It said Taiwan conveyed sincere gratitude to all countries that have voiced justice and 'grave concerns' regarding China's recent belligerent military posturing across the Taiwan Strait.

The statement was issued by the Taipei Economic and Cultural Center (TECC) which is the Taiwanese government's representative office in India.

'The government of ROC (Taiwan) wishes to convey sincere gratitude to the executive branches and parliamentarians of over 50 countries -- including India -- which have called on all sides to exercise restrain, de-escalate tensions, avoid unilateral actions to change status quo and maintain peace and stability in the region,' it said.

In its first reaction to the Taiwan issue, India on Friday opposed any unilateral action to change the status quo in the Taiwan Strait and called for efforts to maintain peace and stability in the region.

India, however, avoided any mention of the "One China" policy in its statement.

Chinese Ambassador to India Sun Weidong on Saturday called on India to reiterate its support for the 'One-China' policy in the backdrop of the Taiwan question, and hoped that New Delhi will support China's 'justified position'.

Beijing has claimed that around 160 countries have reaffirmed their support for the 'One China' policy following Pelosi's visit to Taiwan.

'China's deliberate intensification of various forms of military posturing targeted at Taiwan recently has severely disrupted peace and stability across the Taiwan Strait and in the region,' the statement by TECC said.

'We earnestly call on the international community to jointly condemn China's irrational military provocations and urge all countries to continue to speak up in support of democratic Taiwan with an aim to safeguard the values of freedom and democracy,' it said.

The Taiwanese mission said as a responsible stakeholder of the international community, Taiwan will calmly respond to China's 'unreasonable military threats, firmly defend Taiwan's sovereignty and national security, and protect democracy and freedom without resorting to the acts of escalation or provocation'.

'In the face of evolving developments, the government of Taiwan will continue to enhance its self-defence capabilities while maintaining close communication and coordination with the US, Japan and all other like-minded nations including India to jointly preserve the rules-based international order and safeguard security across the Taiwan Strait and consolidate peace, stability and prosperity in the Indo-Pacific,' it said.