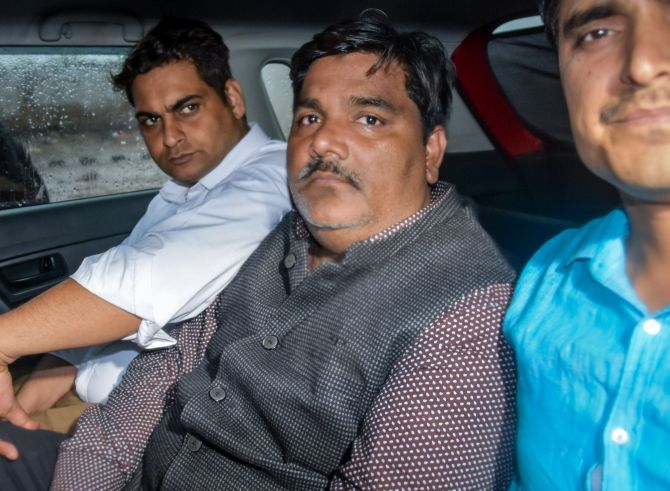 Duty Magistrate Rakesh Kumar passed the order after Hussain was produced before him by Delhi Police which said that his custodial interrogation was required to unearth larger conspiracy, Hussain's advocate Mukesh Kalia said.

Hussain was produced before the duty magistrate amid tight security late in the evening and neither the media nor any lawyer, other then those connected with the case, was allowed inside the courtroom.

Hussain was arrested on Thursday after a court here dismissed his plea seeking to surrender before it in connection with the case.

The court rejected his plea saying that the relief sought by him was outside its jurisdiction.

Advocate Kalia argued before the court that there was a grave apprehension of threat to his life and therefore he has not surrendered before competent court as there is "charged environment" in Karkardooma District court.

The lawyer said Hussain has been falsely implicated in the case and sought protection for his life and property.

Delhi's ruling AAP had then suspended him for alleged involvement in the violence which has left at least 42 people dead and around 200 injured.

The family of Sharma, 26, who was found dead in a drain near his home in northeast Delhi's riot-hit Chand Bagh area, has accused Hussain of being behind the killing.

On the complaint of Sharma's father, the police registered a first information report against Hussain, who has rejected the charge.

Communal clashes had broken out in northeast Delhi four days ago after violence between anti-and-pro-Citizenship (Amendment) Act groups spiralled out of control.