While kicking off the bard's week-long 151st birth anniversary celebrations here, Chief Minister Mamata Banerjee said they were thinking how to convert the mansion where Tagore was born and spent most of his childhood into a museum.

Pointing out how Shakespeare's birthplace in England has been converted to a museum, she said the matter has been discussed with Education Minister and thespian Bratya Basu.

"This should be converted to a museum to preserve our cultural heritage for the coming generations," Banerjee said adding the state government was willing to extend any help  in this regard.

During the programme, it was also announced that the name of Girish Park Metro station, close to Thakurbari, will be renamed as - 'Girish Park Jorasanko Thakurbari' as a mark of homage to the poet.

Vice-Chancellor of Rabindra Bharati University, Prof Chinmoy Guha, told PTI that the state government has decided to introduce light and sound shows at Thakurbari which will chronicle the life and times of Tagore.

"It will recreate the magic of nineteenth century here. Besides attracting Tagore lovers, it will also be a major tourist attraction," he said. Organised by the state tourism department, the celebrations will go on till May 8, coinciding with Tagore's birth anniversary.

After inaugurating the programme, the chief minister, an avid Rabindrasangeet lover, crooned one of the songs penned by Tagore.

"We were never taught music formally but we know at least 200-300 Rabindrasangeet songs," she said, while describing the ongoing celebrations as one of the biggest festivals of her life.

In the form of songs, dance and recitations, classical music maestro Ustad Nishad Khan and Rabindrasangeet luminaries Mohan Singh and Pramita Mullick performed at the  function. Adding festive colour to the occasion, the entire Thakurbari complex was illuminated and decorated in traditional form.

Besides Tagore memorabilia, traditional Bengali foods popular with the Tagore family were also being sold inside the complex. 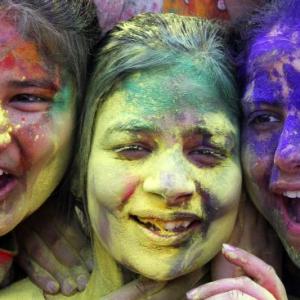 HOLI HAI!! Colourful images from across the world