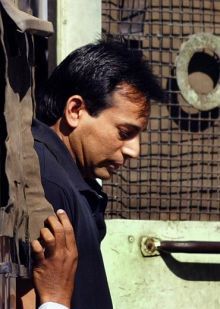 A TADA court on Tuesday directed the Thane police commissioner to conduct an inquiry after a media report claimed gangster Abu Salem, an accused in 1993 Mumbai serial blasts, had married on a train while being escorted by police to Lucknow for a court hearing.

"The designated TADA court has directed the Thane police commissioner to conduct an inquiry as to how an accused, who is in judicial custody, can marry on a train without the permission of the court," prosecutor Deepak Salvi told PTI.

Special Judge G A Sanap's directive came after he took suo-motu cognizance of the report that appeared in a tabloid on Tuesday.

The Thane police chief has been asked to submit his report in 10 days.

According to the report, Salem married a resident of Mumbra in adjoining Thane district last month on a train and that the 'nikah' was performed by a Qazi in Mumbai over phone. Salem's nephew advocate Rashid Ansari and some policemen were witness to the marriage, it was claimed.

However, Salem, while speaking to reporters outside the courtroom, dubbed the report as "baseless" and a "rumour".

An accused in 1993 Mumbai serial blasts, Salem was extradited from Portugal on November 11, 2005, after a prolonged legal battle.