Some of the Municipal Corporation of Delhi-run schools are 'horror houses', the Delhi Commission for Women (DCW) remarked after it conducted surprise inspection and found them without adequate security and sanitation facilities. 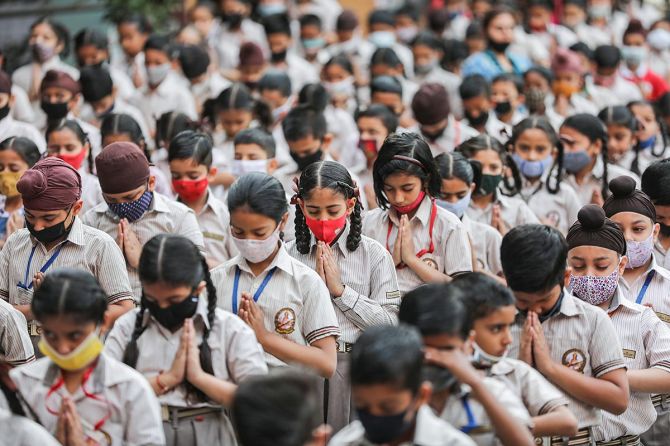 In one of the school premises the DCW inspected on May 20 and 21, the panel claimed it found syringes, drugs, cigarette cases, gutka wrappers and even broken liquor bottles.

The inspection came days after the panel initiated an inquiry into the condition of safety and security of students in schools after two girls allegedly faced sexual assault in an Municipal Corporation of Delhi-run school in Bhajanpura earlier this month.

The DCW said its teams found the gates of all these four schools open and there were no security guards.

After it found syringes, drugs and broken liquor bottles among other substances at the premises of the Kewal Park school, the panel said it has 'recommended filing an FIR in the matter urgently'.

Most of the school buildings were severely damaged and unsafe for children, it said.

'Parts of the ceiling and walls have fallen several times in the school at Aruna Nagar and there have been several narrow escapes. In Bhati Mines, the children were forced to sit in a tin shade in scorching heat,' it said.

The DCW observed that the schools did not have a single CCTV camera that was operational and that the toilets were 'extremely dirty'.

'Also, there were several toilet doors that were broken or could not be locked from inside, which raises serious concerns regarding the safety and privacy of children. In the school at Bhati Mines, the girl toilets were locked, and the boys and girls were forced to defecate in the open, as there was no water connection in the toilets,' it alleged.

Further, the panel said the four schools were overcrowded and it was clear that the norms for teacher-pupil ratio were not being followed.

'The DCW was informed that MCD is running summer classes for the children studying in its schools from 7.30 am to 11am. However, the mid-day meal is presently not being served in any of its schools,' it said.

During the inspection, it was also found that proper benches were not available in schools.

The DCW has issued a notice to MCD commissioner in this connection and sought a detailed action report by May 30.

It panel has also sought details of the officials responsible for the 'dismal' condition of schools and has asked the MCD to take action against them.

'These schools are horror houses where students and teachers are extremely unsafe. How can a school exist without a security guard and CCTV? In today's world, MCD is running schools where girls are forced to defecate in the open! So much so for the Total Sanitation Campaign! The situation is extremely alarming and urgent steps need to be taken to safeguard the future of the children,' DCW chief Swati Maliwal said.