India is expected to press for text-based negotiation during the current session of the United Nation General Assembly. Suman Guha Mozumder reports from New York 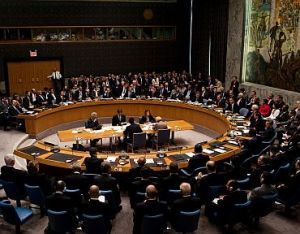 The Foreign Ministers of the G4 countries -- India, Brazil, Germany and Japan – on Thursday expressed their continued commitment to a Security Council reform, an important priority for India, which would be ‘reflective of the geopolitical realities of the 21st century.’

On the sidelines of the 69th session of the UN General Assembly session, the ministers that included India’s External Affairs Minister Sushma Swaraj exchanged views on Security Council reform  and said that they agreed that the difficulties of the Security Council to effectively address current international challenges are ‘a compelling reminder’ of the urgent need for a Council reform that makes it more broadly representative, efficient and transparent and thereby enhances its effectiveness and the legitimacy and implementation of its decisions.

The G4 Ministers invited all their counterparts to use the 70th anniversary of the UN next year as an opportunity to finally achieve a concrete outcome on a process that has dragged on for over twenty years and to engage in all possible efforts to fulfill, by September 2015, the mandate given by our heads of state and government.

Indian diplomats told this correspondent that while there is enough traction from the floor for council reform, the resolution of the issue has remained deadlocked due to the absence of a short text on the basis of which negotiations would take place in the UN. India is expected to press for the text-based negotiation during the current session of the UN General Assembly.

The G4 countries reiterated their commitment as aspiring new permanent members of the UN Security Council, as well as their support for each other's candidatures. They also reaffirmed their view of the importance of developing countries, including from Africa, to be represented in both the permanent and non-permanent categories of an enlarged Council.

The ministers emphasised their readiness to further reach out to reform-oriented member states to discuss models of an enlarged Security Council in both the permanent and non-permanent categories.

In this context, they commended Japan's initiative to host an outreach meeting with other UN member states, with attendance from participants with a wide range of views on the reform issue in July 2014. They recognised the need for greater involvement of civil society, the media and academia on the discussions about the reform of the Security Council and recalled the seminars hosted by Brazil, India and Japan to broaden the debate on the urgency of reforming the body.

The ministers also discussed the outcome of the tenth round of the intergovernmental negotiations on Security Council reform and expressed their appreciation for the important role played by the President of the 68th General Assembly, John Ashe in generating positive momentum for the negotiations. It reflected in the establishment of an Advisory Group, which produced a non-paper providing a clear summary of the main positions of member states.

The ministers also welcomed the assessment of July 9 this year by the chairman of the Inter Governmental Negotiations, Afghan Ambassador Zahir Tanin, and noted his call for a high-level event to be held at the General Debate of the 70th General Assembly and the need to finally start text-based negotiations.

The ministers expressed their expectations to work closely with the President of the 69th General Assembly, Sam Kahamba Kutesa, to bring about the urgently needed reform of the Security Council.

“Although it has taken time, India is highly optimistic that the much-needed security council reform will take place sooner or later once the short text-based document for negotiations is tabled in the UNGA,” an Indian diplomat told this correspondent this week in response to a question ahead of the ministerial meeting.

India is setting is eyes for such council reform during the 70th anniversary of the United Nations next year and is seeking to use the current UNGA session as a stepping stone for achieving that goal.