External Affairs Minister Sushma Swaraj on Wednesday called on Afghan President Ashraf Ghani in Islamabad and discussed connectivity, terror threats to the war-torn country and the peace and reconciliation process there.

Swaraj, who was accompanied by Foreign Secretary S Jaishankar and India's envoys to Pakistan and Afghanistan, met Ghani for nearly 30 minutes on the sidelines of the 'Heart of Asia' Conference, during which they also talked about India's willingness to join Afghanistan-Pakistan trade and transit agreement.

The two sides also noted the forward movement on long-pending TAPI gas pipeline, ground-breaking ceremony of which will take place in Turkmenistan next week which will be attended by Ghani and India will be represented by Vice President Hamid Ansari.

"A Strong Bond of Friendship. EAM Sushma Swaraj calls on President Ashraf Ghani for a bilateral on sidelines of HoA," External Affairs Ministry Spokesperson Vikas Swarup tweeted along with a picture of the two leaders.

"They reviewed bilateral ties including transit. Discussed terror threat in Afghanistan and status of peace and reconciliation process," he said.

Earlier, while speaking at the Heart of Asia Conference, Swaraj expressed India's willingness to help Afghanistan in shoring up its defence capability. She also said India's vision of the Istanbul process is one of interlinked trade, transit, energy and communication routes, with Afghanistan as an important hub. Swaraj also held bilateral meetings with Kyrgyzstan Foreign Minister Erlan Abdyldaev and her Iranian counterpart Javed Zarif, whom she personally thanked for the release of Indian crew members of a ship. Swaraj in conversation with her Kyrgyzstan FM Erlan Abdyldaevs.

The Kyrgystan minister asserted that "India's presence in Central Asia is much needed and appreciated," Swarup said. During her meeting with Zarif, Swaraj thanked him for the release of Indians, to which the Iranian minister also hoped that India will reciprocate by releasing Iranian sailors lodged in Indian jails.

Swaraj assured Zarif that Indian officials will examine and expedite the process. According to reports, there are about 11 Iranians lodged in the jails in the country.

The two sides also discussed operationalisation of the MoU signed for the Chabahar port which was inked earlier between the two countries. Zarif also talked about the joint action plan after the announcement of lifting of sanctions by some countries against Iran. 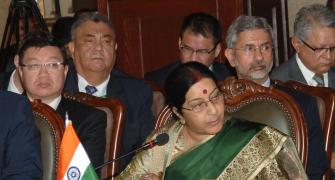 'Time we show maturity to do business,' Swaraj tells Pakistan during 2-day visit 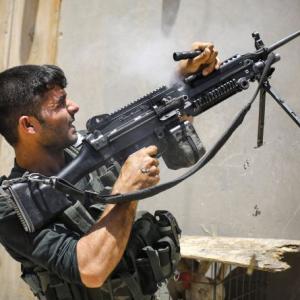