Fresh political storm in Kerala after Swapna's revelations against CM

Kerala on Wednesday witnessed a political storm over the startling revelations by Swapna Suresh, a key accused in the sensational gold-smuggling in the diplomatic bags case, with the state government allegedly using vigilance officials to pick up a co-accused and a complaint being lodged by an Left Democratic Front MLA seeking a probe into the "conspiracy" behind her allegations. 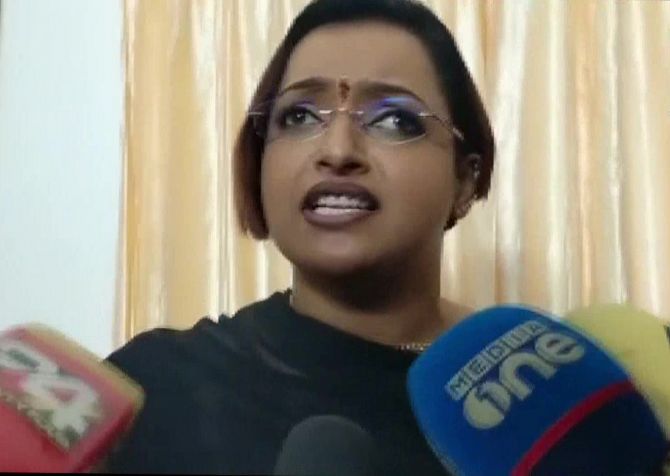 The entire chain of events played out like the screenplay of a thriller movie starting with Swapna in the morning telling reporters outside her office in Palakkad that her allegations against Chief Minister Pinarayi Vijayan came in the wake of threats to her life and not because of any personal or political agenda.

Minutes after she concluded her press conference, she told a TV channel that her colleague Sarith PS, who also worked with her at HRDS India, had been kidnapped in broad daylight from her home by 3 or 4 unknown people.

The Opposition continued its onslaught against the government over the issue and pressed for Vijayan's resignation.

Continuing her attack against the government, Suresh alleged that Sarith has been "kidnapped" by some unknown people because of her revelations.

"Earlier you asked what the threat was. Now, it is no longer threats, the attacks have started. HRDS India staff Sarith has been forcefully kidnapped from my home by 3 or 4 unknown people. They have started their attacks. Can you imagine that? I only spoke a little, did not speak in detail and already they have become scared. This is a signal of that. They are confessing on their own through such dirty tactics," she claimed after news of his alleged abduction came out.

"Now you know the threats faced by me, my family and Sarith. People of Kerala need to realise that anyone can be killed or abducted in broad daylight here," she added.

Subsequently, it was reported that State Vigilance officials had picked up Sarith, also an accused in the gold-smuggling case, in connection with another case against him regarding the Life Mission project.

Sarith, who was released from Vigilance custody after a few hours, told reporters that he was not given any prior notice or even allowed to wear slippers before he was forcibly picked up and taken away by the officials.

They did not even disclose who they were when they hauled me away, he alleged.

At the vigilance office he was repeatedly asked only one question -- on whose instructions had Suresh made the allegations -- and nothing was asked regarding the Life Mission case, he told reporters.

Sarith also told reporters that he received no prior notice before he was picked up and only today he was given a notice to appear on June 16 and that his phone has been seized.

Suresh, while speaking to reporters, also questioned how Sarith could be picked up in the case without giving any prior notice and added that she was not scared of anyone.

In the morning, she had told media-persons that she only disclosed before the court -- in her statement under section 164 of Criminal Procedure Code -- the other people allegedly involved in the smuggling cases and their "degrees of involvement".

Suresh said she gave the 164 statement as there were threats to her life and if something happened to her or her family members, she may not have the courage to come forward and speak about the case.

"Therefore, to be on the safe side I deposed all the statements before the court with the facts," she said and added that she has not finished what she has to say about the cases.

"There is a lot more for me to say," she added.

Subsequently, the drama surrounding the case unfolded further with Kerala assembly member and former minister K T Jaleel on Wednesday lodging a police complaint demanding a probe into the alleged conspiracy behind the fresh allegations levelled against Vijayan and his family by Suresh.

Earlier in the day, LDF convener E P Jayarajan had told the media that there was a "well-planned conspiracy" behind the "baseless allegations" against the Chief Minister and the State government should investigate into the matter and find out those behind it.

After her revelations before the media, subsequent to recording her 164 statement, Vijayan had issued a statement dismissing her claims and allegations as "baseless".

Strongly reacting to the charges, the CM, in a statement, said, "Unsubstantiated allegations have been made through the media from some quarters for narrow political reasons" and this was "part of some political agenda".

"Such an agenda was rejected by the people earlier. After a break, the old things are repeated by the accused in the case. There is not even a shred of fact in it", Vijayan said.

The ruling CPI-M continued to defend the CM, with its state secretariat issuing a statement alleging conspiracy behind the "false" allegations against Vijayan.

In her press conference held in the morning, Suresh had also alleged that while in jail she was "tortured and mentally harassed" by the senior jail officers leading to her suffering from a heart attack, which was termed by them as a drama, and later she repeatedly suffered from fits.

She said what she has disclosed now was not meant to defame anyone or remove anyone from the post of CM nor was it a publicity stunt to create an image for herself.

"....I was in jail for 16 months. My kids suffered. I lost my job. They were exploiting and manipulating me. Now, I just want to live and raise my kids. Please allow me to do that. Other than that I have no agenda," she said.

Suresh, a former employee of the UAE consulate in Kerala, was taken into custody by the National Investigation Agency (NIA) along with another accused Sandeep Nair from Bengaluru on July 11, 2020.

The NIA, Enforcement Directorate (ED), and customs conducted separate probes into the racket that was busted with the seizure of gold worth Rs 15 crore from the diplomatic baggage of the UAE consulate at Thiruvananthapuram airport on July 5, 2020.

Several people, including M Sivasankar, the former principal secretary to the chief minister and another ex-employee of the UAE consulate in Kerala, Sarith P S, were arrested in connection with the case.