Suspected Covid bodies found buried in sand near Ganga in UP

The Unnao district administration has ordered a probe after some bodies were found buried on the Ganga riverbank in the Bighapur Patan tehsil area, officials said on Thursday. IMAGE: Bodies buried in the sand on the banks of Ganga in Unnao district, on Thursday. Photograph: PTI Photo

The district administration swung into action after locals spotted bodies buried on the Baksar ghat of the river with some photographs of the bodies too going viral on social media, they said.

"After the matter came to the light, a sub-divisional magistrate was sent to the spot for the probe. He will submit his report," Unnao District Magistrate Ravindra Kumar said.

He said the Baksar ghat is on the border of many districts including Rae Bareli, Fatehpur and Unnao and people go there for the cremation of bodies.

"We will take appropriate action after seeing the situation. Directives have been issued that such situation does not arise," the DM said when asked about the alleged burial of bodies on the ghat.

Sub-Divisional Magistrate Dayashankar Pathak, who visited the Baksar ghat of the river with the circle officer, said they did not find any dead body out in the open.

On the exact number of bodies buried on the riverbank, the SDM said he was not aware of the number.

People living near the riverbank on Thursday said no dead body was allowed to be buried and all the bodies being brought to the ghat are being cremated. 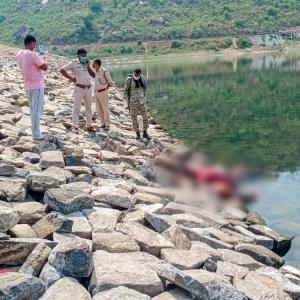