Jadhav asked about Baba, after seeing mother without mangalsutra: Sushma 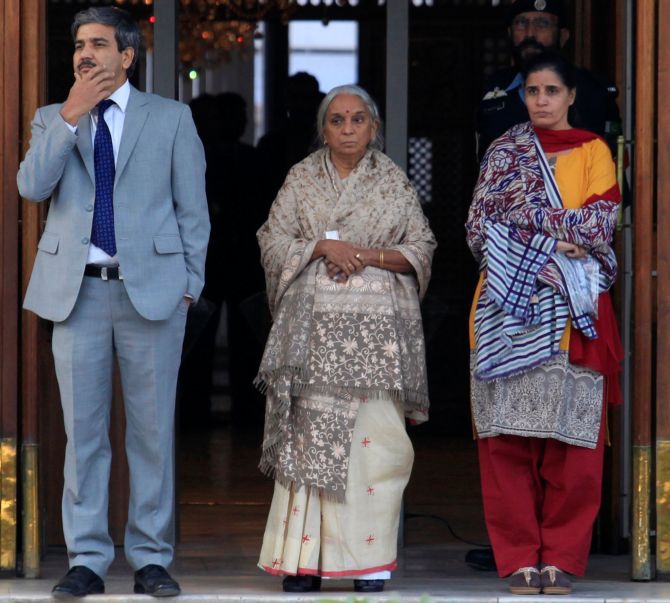 India on Thursday tore into Pakistan for presenting the wife and mother of Kulbhushan Jadhav as "widows" during their highly controlled meeting, and accused Islamabad of turning an emotional moment into "an instrument to further its propaganda."

In identical statements in both houses of Parliament, External Affairs Minister Sushma Swaraj said there was "serious and gross violation of human rights of the family members of Jadhav", who is on death row in Pakistan for alleged spying.

She pointed out that Jadhav's mother Avanti and wife Chetna were forced to remove their mangalsutra, bindi and bangles and footwear, and even made to change their attire on the pretext of security.

"Both married women were presented as widows in front of a son and husband. There can be no greater insult than this," said Swaraj as other members chorused "shame, shame."

"There are not enough words to condemn the same," she said.

Jadhav's mother and wife met him on Monday inside the Pakistan foreign office building in Islamabad under unusual circumstances -- he was separated from the two women by a glass screen, and they conversed through an intercom. Avanti was not allowed to speak in their native Marathi language.

Chetna's footwear was confiscated. Jadhav's words apppeared tutored and the atmosphere was intimidating.

Swaraj said Pakistani authorities are now talking of chip, camera or a recorder being installed in the shoes. This is "absurdity beyond measure," she said, pointing out that the two women had cleared security at airports in India, Dubai and Pakistan when nothing suspicious was detected.

After the meeting, Pakistani authorities also did not return the shoes of Jadhav's wife despite repeated requests.

"The Pakistan authorities have been cautioned against any mischievous intent in this regard through a Note Verbale yesterday," she said.

"This meeting could have been a step towards moving forward. But,it is a matter of great disappointment, that the meeting took place flouting all the understandings both countries had agreed to," she said.

Following the statement, members cutting across all party lines in both Houses voiced full-throated supported for the government.

"We will not tolerate insults to the wives and mothers and to the country's dignity," Azad said, adding the government should ensure that Pakistan ensures Jadhav's saftey in custody.

Pakistan says Jadhav, an ex-Indian Navy officer, was arrested in Balochistan in March with a fake passport, a charge denied by India, which says he was kidnapped from Iran where he has legitimate business.

The 47-year-old Jadhav has been sentenced to death by a Pakistani military court, but the execution has been stayed by the International Court of Justice following India's efforts.

Swaraj said Jadhav's mother and wife were taken for the meeting through a separate door without informing the accompanying the deputy high comissioner of India.

Before they could see Jadhav, a security official told the two women to remove their mangalsutra and bindi, the Hindu symbols of matrimony.

Swaraj said that Avanti told her this morning in a choked voice that she had protested against the removal of the mangalsutra but her plea was turned down by the security official.

Swaraj said that as soon as Jadhav saw his mother without the mangalsutra and bindi, he asked "baba kaisey hain" or "how is dad," because he might have feared that "something bad has happened" back home.

"The meeting of Kulbhushan Jadhav with his mother and wife was portrayed by Pakistan as a humanitarian gesture. However, the truth is that both humanity and compassion were missing during the meeting that was arranged on humanitarian and compassionate grounds," she said.

"I am fully confident that this entire House and through the House, the people of India, strongly condemn, in one voice, the obnoxious behaviour of Pakistan and affirm their solidarity with the Jadhav family."

Most of the Bharatiya Janata Party members in Lok Sabha responded with shouts of "Pakistan murdabad."

Swaraj said while the imminent threat to Jadhav's life has been averted, "we are now engaged in seeking a permanent relief, based on stronger arguments, through the legal avenue offered by the International Court of Justice," she said.

She said the mother and wife, on their return from Islambad, had conveyed to her that Jadhav appeared "under considerable stress and was speaking in an atmosphere of coercion."

"As the meeting progressed, it was clear to them that his (Jadhav's) remarks were tutored by his captors and designed to perpetuate the false narrative of his alleged activities. His appearance also raised questions of his health and well-being," she said.

Before the statement, Rajya Sabha Chairman Venkaiah Naidu said the sensitive matter was before the ICJ and urged the MPs should exercise restrain in making statements keeping the welfare of Jadhav in mind.

Naidu said the entire House joins together to appreciate the efforts of the government and asks it to take steps to ensure safe and secure release of Jadhav.

He also wanted the government to convey to the international coummunity that Pakistan behaved in an inhuman manner. 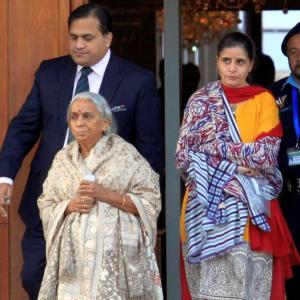