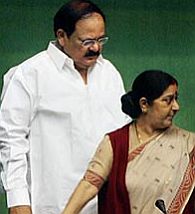 A number of senior BJP leaders including Leader of the Opposition in Lok Sabha Sushma Swaraj and party Vice President S S Ahluwalia rushed to L K Advani's residence in New Delhi after the announcement of his resignation on Monday from key party fora.

Advani's resignation from major party posts comes a day after the elevation of his one-time protege Gujarat Chief Minister Narendra Modi as election campaign committee chief at the national executive meet being held in Goa.

Among others who went to Advani's Prithviraj Road house was Vijay Goel.