'India believes that the world is a family, and the best means of resolution is shared discourse. A family is shaped by love and is not transactional; a family is nurtured by consideration not greed; a family believes in harmony not jealousy.' India on Saturday warned that the United Nations risks falling into irrelevance in the absence of fundamental reforms, saying multilateralism will collapse if the world body remains ineffective.

For long, India has been calling for the reform of the UN Security Council along with Brazil, Germany and Japan. The four countries support each others' bids for the permanent seats in the top UN body.

"I began by highlighting the unique and positive role of the UN, but I must add that step by slow step, the importance, influence, respect and value of this institution is beginning to ebb," External Affairs Minister Sushma Swaraj said in her address to the General Debate of the 73rd session of the UN General Assembly in New York.

Swaraj emphasised that the UN must accept it needs fundamental reform.

"Reform cannot be cosmetic. We need to change the institution's head and heart to make both compatible to the contemporary reality," she said.

Swaraj warned against a delay in reforming the world body, saying reform must begin today as tomorrow could be too late.

"If the UN is ineffective, the whole concept of multilateralism will collapse," she said.

At a time when there is much debate about multilateralism, which as UN Secretary-General Antonio Guterres said is under fire precisely when it is needed the most, Swaraj said India will never weaken the multilateral mechanism.

"India believes that the world is a family, and the best means of resolution is shared discourse. A family is shaped by love and is not transactional; a family is nurtured by consideration not greed; a family believes in harmony not jealousy.

"Greed breeds conflict; consideration leads to resolution. That is why the United Nations must be based on the principles of the family. The UN cannot be run by the 'I', it only works by the 'We'," she said.

Drawing a parallel with the fate of the League of Nations, Swaraj said the League went into meltdown because it was unwilling to accept the need for a reform.

"We must not make that mistake. If 2030 is the agreed deadline for delivery on Sustainable Development Goals, then it also marks hundred years of the lapse of the League into irrelevance. Surely there is something to learn from this coincidence?" she said.

Swaraj stressed that India does not believe that the United Nations should become the instrument of a few at the cost of the many.

"India believes that we must move forward together or we sink into the swamp of stagnation," she said.

India has repeatedly reaffirmed the need for an early reform of the UN Security Council including the expansion of both permanent and non-permanent categories of membership to enhance its legitimacy, effectiveness and representativeness.

Along with the fellow nations in the G4 bloc, India has maintained that the current composition of the 15-nation Council does not reflect the changed global realities and stressed that UNSC reform is essential to address today's complex challenges.

Swaraj assured the UNGA that India was totally committed to achieving the sustainable development objectives for its 1.3 billion people.

Swaraj said in 2015, India had established 2030 as a critically important horizon for 17 Sustainable Development Goals.

"A common refrain, from 2015, has been that we will reach that horizon only if India finds its way to this destination. Otherwise, we shall fail," she said.

"I assure this august gathering...that India will not let you fail. We are totally committed to achieving these objectives for our own people," Swaraj said.

Policy experts, analysts and think tanks have opined that the global success in achieving the 2030 development agenda is highly reliant on India's performance.

Swaraj told the 193-member UN body that under Prime Minister Narendra Modi's leadership, India had initiated unprecedented economic and social transformation that will help the country achieve its Sustainable Development Goals (SDGs) much before time.

The SDGs, otherwise known as the Global Goals, are a universal call by the United Nations Development Programme (UNDP) for action to end poverty, protect the planet, improve health, education and ensuring that all people enjoy peace and prosperity by 2030.

Swaraj highlighted the various initiatives and programmed launched by the Indian government that mirror the targets of the SDGs.

She said through the 'Jan Dhan Yojana', the world's largest financial inclusion scheme, over 320 million Indians, who had never crossed the door of a bank before, now have bank accounts.

The scheme has enabled the poor to receive allotments from the government's welfare programmes into their personal accounts, through Direct Benefit Transfer, which has ended waste and corruption in the system.

Describing it a revolutionary scheme, Swaraj said 500 million Indians will benefit from it as they get an insurance cover of Rs 500,000 per family per year.

"We have a prayer in India: Sarve Santu Niramaya, which means, all should be healthy. The Aayushman Bharat Yojana is the answer to this prayer," she said.

India also launched the largest housing scheme in the world aimed at ensuring that everyone has a roof above their heads.

Under the scheme, the government has set a target of building nearly 21 million homes by 2022. So far, over five million homes for the poor have already been constructed.

Schemes such as Skill Development Programme and Mudra Programme aid in the skill development of the citizens and help the poor turn into entrepreneurs.

Over 140 million Indians have taken Mudra loans and 76 per cent of the beneficiaries are women.

"At the heart of Prime Minister Modi's transformative vision is a radical idea: that the uplift of any nation is best achieved through the all-round empowerment of women," Swaraj said, adding that all the ambitious schemes being implemented across India have the welfare of women at their core.

She also told the General Assembly that at a time when some developed nations with huge economies do not offer more than six weeks paid maternity leave, India is implementing the Maternity Benefit Scheme, in which women get 26 weeks of paid leave to care for their newborn.

"In India, we have implemented what women across the world need," she said.

As independent India marks its 75 years in 2022, Swaraj said Prime Minister Modi has pledged to build a 'New India' by then.

"That is our horizon for India in 2022. We will reach that horizon," Swaraj said.

Swaraj added that the UN General Assembly has to be made into a platform of understanding, assistance and true justice where nations understand each others' pain and work with developed countries to ease and eliminate this pain.

"Arrogance has no place in our scheme of things; arrogance is counter-productive and self-defeating. Let us work for the benefit of the less fortunate. Let us work for a world where there is peace, serenity and shared prosperity; a world that is free from terrorism, tension and violence," she said.

Swaraj told the UN General Assembly that countries that have exploited the nature for their immediate needs cannot abdicate their responsibilities and developed nations must lift the deprived with financial and technical resources.

Under-developed and developing nations are the worst victims of climate change and these neither have the capacity nor the resources to meet this crisis, she said in her address.

"The biggest challenge of our era comes from the existential threats of climate change and terrorism," she said.

"Those who have exploited nature for their immediate needs cannot abdicate their responsibilities. If we have to save the world from the adverse effects of climate change, then developed nations must lift the deprived with financial and technical resources," Swaraj said.

She asserted that the principle of common and differentiated responsibilities and respective capabilities was reiterated in the 2015 Paris Agreement on climate change.

Swaraj told the 193-member UN body that India has risen to meet the challenge of climate change.

The ISA is a treaty-based body which intends to promote solar energy in the 121 tropical countries.

Modi and French President Emmanuel Macron were conferred this week with the UN's highest environmental honour -- Champions of the Earth Award -- for their contributions.

The two leaders are recognised in the Policy Leadership category for their pioneering work in championing the ISA and promoting new areas of levels of cooperation on environmental action, including Macron's work on the Global Pact for the Environment and Modi's unprecedented pledge to eliminate all single-use plastic in India by 2022, she said.

Swaraj said that the ISA now has 68 nations and in March, India and France chaired the Founding Conference of the ISA in which 120 countries participated.

"Our Prime Minister has described his vision of sustainable and available energy in a typically apt phrase: One Sun, One Grid. This breakthrough concept can become the solution we seek to the problems," Swaraj said.

Earlier this week in the high-level meeting on climate change convened by UN Secretary-General Antonio Guterres, Swaraj said India is willing to take the lead in climate action and the country's commitment to combat climate change is rooted in its ethos, which considers Earth as mother.

It has set a target of generating 175 Giga Watts of solar and wind energy by 2022. India has installed over 300 million LED bulbs saving USD 2 billion and 4 GW of electricity.

She also cited the example of the Kochi airport which is the first solar-powered airport in the world.

The Cochin International Airport was also among six of the world's most outstanding environmental changemakers recognised this week with the Champions of the Earth Award.

The airport took home the award for Entrepreneurial Vision for its leadership in the use of sustainable energy.

"The UN Environment said that Cochin is showing the world that our ever-expanding network of global movement doesn't have to harm the environment.

"As the pace of society continues to increase, the world's first fully solar-powered airport is proof positive that green business is good business," she added. 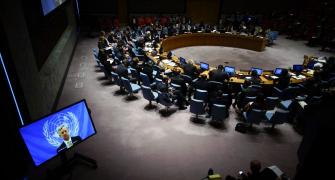 'UN's permanent members do not want any change' 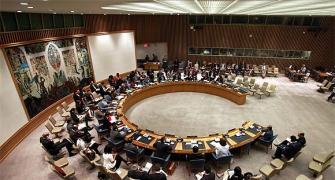 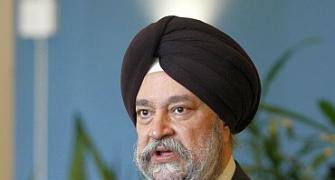 Exclusive: 'No doubt Pakistan voted for us' 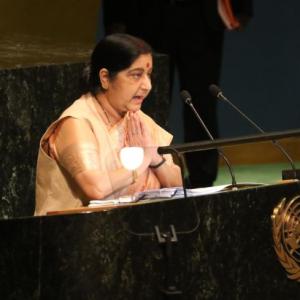 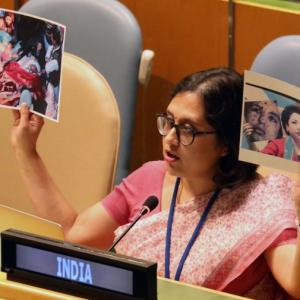