Relieved to be back among the runs ahead of next month's ICC ODI World Cup, Suresh Raina said he would have been left devastated had India failed to draw the fourth and final Test against Australia in Sydney following his failures with the bat in both innings.

Raina made a timely return to form with a brisk half-century (51) in the second match of the tri-series against Australia, which the visitors lost by four wickets.

The left-hander said it was difficult to digest his poor showing in Sydney, as he was making a comeback to Test cricket after a long wait of nearly two years.

"In Sydney I played my first Test after more than two years and didn't score a run. That hit me real bad. Everyone in the team tried to cheer me up saying 'it's okay, it was hard luck'. But I was really disappointed. I was just stunned. It felt like a bad dream. I had worked so hard for this opportunity and earned it after so long," Raina told bcci.tv.

"It happened to me in England in 2011 -- I got a pair in the Oval Test and then did well in the ODIs. So, I had been in that situation before. But this time it was tougher because of how long I had waited for this chance. What helped me get over it was that we drew the Test. Had we lost it, it would have been devastating for me," he said.

Raina revealed that he decided not to dwell too much on the past and instead focus on doing well in the ODI tri-series, which also features England.

"I learned a lot in the next two days after that Test, gathered myself and practised really hard with the white ball. It was a new format and the one I have done well in. I put the Test behind me and started to focus on the ODIs. I am glad I could score a few runs right away," he said.

The 28-year-old also pointed out that he seems to have gotten over his problem against the short ball after his stint with Sachin Tendulkar and Pravin Amre in Mumbai last year.

"People have been talking about the short ball for years now. But I have come a long way. I worked hard with Sachin Paaji at the BKC [Bandra-Kurla Complex in Mumbai] and with [Pravin] Amre Sir as well. I believe I have improved a lot in that regards and it shows in the way I have been playing the bouncer for quite a while now," he pointed out.

Talking about the team in general, Raina said the Indians need to improve their bowling as the batsmen cannot be expected to bail the side out everytime.

"I feel that we can improve our bowling. Today we scored close to 270. In the World Cup, we might have to defend 240-odd runs and for that our bowling needs to be much better. We didn't have Ishant [Sharma] and that made a lot of difference. His presence will be a big boost in the coming matches. Bhuvi [Bhuvneshwar Kumar] bowled really well today, especially in the death," he said.

"The good thing about this team is that everyone is encouraged to take up leadership responsibilities. We have come up with a system in the team wherein we form small groups and discuss our performances at length. There is a different leader every day. Among batsmen sometimes it is Virat [Kohli], at times Rohit [Sharma] or me," he said.

"Ishant, [Mohammed] Shami and Bhuvi take turns with the bowling group. The idea behind this system is for each player to express himself. If you don't know what a person is thinking or how he is feeling, you tend to assume things about him and wonder why you're not getting the response you're looking for.

"If everyone speaks up, there is an open communication within the team and that helps us understand each other better. It is a very good system that Duncan [Fletcher] has brought into practice," he added.

Asked if the team has a good chance of defending the World Cup crown next month, Raina said, "We have played very competitive cricket in the last two months and that has made the boys very tough. They are all very hungry to perform and win.

"We have done very well in the ICC tournaments in the last four years and that gives the boys a lot of confidence. We are hungry...every individual in the team is."

Image: Suresh Raina hits out during the second ODI match against Australia in Melbourne on Sunday. 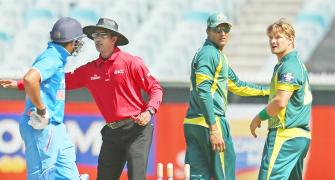 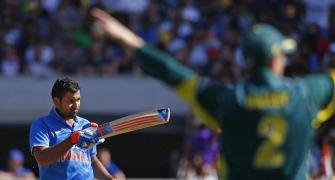 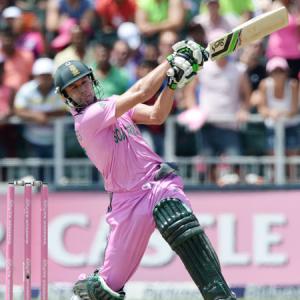