Extending support to three new farm laws, two farmer organisations from Uttar Pradesh on Thursday met Union Agriculture Minister Narendra Singh Tomar and urged him not to repeal the Acts, against which several other unions have been protesting on various borders of the national capital for almost a month now. 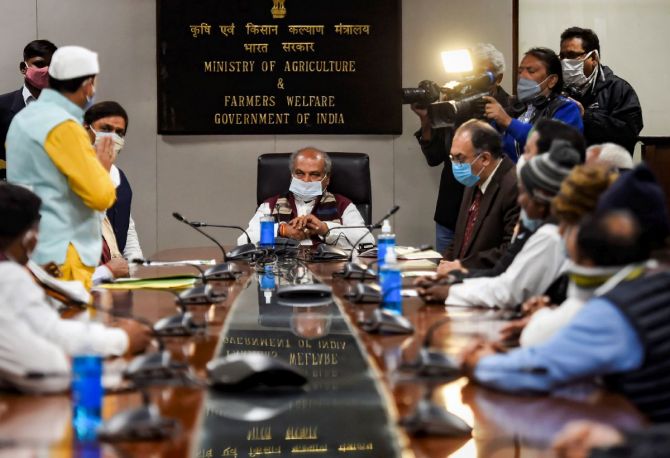 Kisan Mazdoor Sangh (KMS) and Kisan Sena (KS) made a representation, which also included a demand for strengthening the dispute resolution system in case of any trouble in contract farming.

So far, at least 12 farmers group have extended their support for the laws, the previous ones being from Uttarakhand, Delhi and Uttar Pradesh, among other places.

Bharatiya Janata Party leader and former Union Minister Satya Pal Singh was also present in the meeting with a delegation of KMS from Baghpat district.

After the meeting, Singh told reporters that Punjab farmers alone are protesting because the commission agents fear losing their business if trade without tax is allowed outside mandis under the new farm laws.

While there are 16 crore farmers in the country, Punjab with 11 lakh farmers are protesting against the laws, he claimed, adding the reason for this is the loss of business to commission agents.

Punjab levies the highest mandi tax of 8.5 per cent, while it is 1.5 per cent in Uttar Pradesh, he added.

When asked some farm leaders from Western UP are also opposing the laws, Singh said, "In western Uttar Pradesh, no one is opposing the laws. Only 100-150 people were with (farmer leader) Rakesh Tikait for protest.

"When the bills were passed in Parliament, he was the first one to thank the prime minister immediately. His father Mahendra Singh Tikait in 1993 had demanded the same kind of freedom (for farmers)."

In a memorandum submitted to the minister, KMS President Chaudhary Prakash Tomar said, "Deenbandhu Chhotu Ram had freed farmers and labourers from moneylenders, Chaudhary Charan Singh freed us from zamindars and after 70 years of the country's independence, Prime Minister Narendra Modi has freed us from clutches of middlemen and commission agents... We fully support the three farm laws."

While supporting the new laws, KMS demanded that the government should consider amendments to ensure a village-level tribunal is set up with representation from the government, judiciary and farmer organisations for speedy and fair resolution of disputes arising out of contract farming.

KMS also urged the government to take action against sugar mills in Kinnauri, Modinagar and Malkapur region of UP for the delay in payment of cane price.

Another delegation of farmers from Agra-based Kisan Sena also extended support for the laws.

"The protesting unions were earlier demanding amendments but now they want the repeal of the laws. We have come here to urge the government to ensure the new laws are implemented," Kisan Sena President Gauri Shankar Singh said.

Kisan Sena, in its memorandum submitted to the minister, asked the government to consider setting up a 'Farmers Commission (Kisan Aayog)' at the central level for dispute resolution in case of trouble in contract farming.

Its demands also included making available diesel and electricity at lesser rates for farming, ensuring that farm produce is not sold below MSP and free education for children of farmers.

Thousands of farmers and their family members are protesting at various Delhi borders for nearly a month seeking repeal of the three farm laws. So far, five rounds of formal talks between the Centre and 40 protesting farmer unions have remained inconclusive.

The government has written twice inviting them for the next round of talks at a date of their convenience. 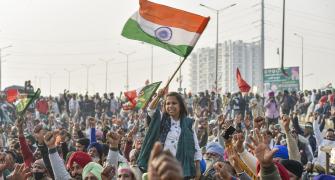 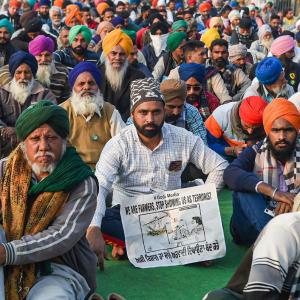 Farmers want repeal of agri laws in agenda for talks