Film actor and Gurdaspur MP Sunny Deol has been asked to explain his poll expenditure during the recent Lok Sabha elections after it was found to have crossed the statutory limit of Rs 70 lakh, an official said on Wednesday. 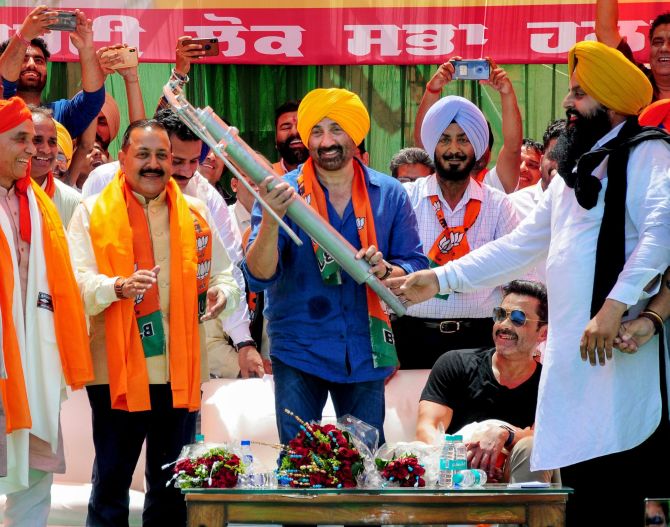 The notice to Deol to "reconcile" his poll expenditure account was issued by Gurdaspur District Election Officer-cum-Deputy Commissioner Vipul Ujjwal.

“His poll expenditure was found to be more than Rs 70 lakh limit,” said Ujjwal.

He defeated Congress nominee Sunil Jakhar with a margin of 82,459 votes.

Though Ujjwal refused to comment on the election expenditure figure, official sources said as per preliminary calculations, Deol's poll expenditure was found to be Rs 86 lakh.

Ujjwal said the amount of Deol's poll expenditure was not a “final” figure.

“We have issued a notice to him (Deol) for reconciliation of accounts and the final figure of the poll expenditure will be known only after the reconciliation and settlement of the accounts,” he said.

“It is too early to comment on the overspending right now,” added Ujjwal.

For Lok Sabha candidates, the statutory poll expenditure limit has been fixed at Rs 70 lakh.

Deol's poll expenditure was found to be in excess of the limit among all other candidates in the Gurdaspur Lok Sabha constituency, officials said.

The reconciliation of accounts is likely to continue till June 22 and 23.

Ujjwal further said after the elections, every candidate was issued notice for the reconciliation of their accounts.

“It is a normal statutory notice,” he added.

Earlier on May 15, the Election Commission had issued directions for adding Rs 1.74 lakh to Deol's poll expenditure after he failed to respond to its query about a Facebook page being run in his support.

The order had come on a complaint by the Punjab Congress, which claimed the Facebook page, 'Fans of Sunny Deol', was being run without any prior permission of the poll watchdog.