The RLSP leader from Bihar said he is open to joining the opposition alliance. 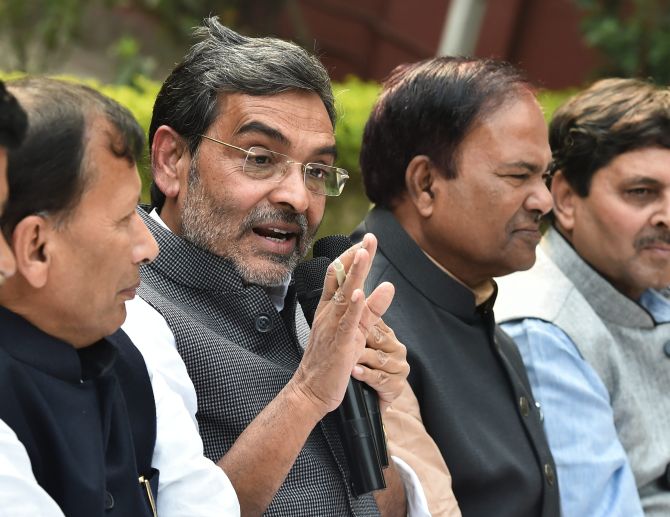 IMAGE: RLSP chief and Union minister of state for human resource development, Upendra Kushwaha addresses a press conference to announce his resignation from the Union Council of Ministers, at his residence in New Delhi, on Monday. Photograph: Manvender Vashist/PTI Photo

Rashtriya Lok Samata Party president Upendra Kushwaha on Monday severed his ties with the Bharatiya Janata Party and resigned from the Union council of ministers, accusing Prime Minister Narendra Modi of reducing the cabinet to a 'rubber stamp', 'betraying' backward classes and giving Bihar only 'jumlas'.

Making the announcement a day ahead of Parliament's winter session, the RLSP leader from Bihar said he is open to joining the opposition alliance, which includes Lalu Prasad Yadav's Rashtriya Janata Dal and the Congress.

Though the decision was expected, it did not go down well within his own party with both the RLSP MLAs in Bihar saying they would remain in the NDA.

The Bihar BJP came out with a point by point rebuttal of the allegations levelled by Kushwaha, the former minister of state for human resource development.

Kushwaha sharply attacked Modi on a host of issues in his resignation letter, which was also released to the media.

He said he felt 'betrayed and dejected' by the prime minister's leadership and alleged that 'fixing' political opponents and not working for the poor had become the government's priority.

"We are aghast over Kushwaha's charge that he was being humiliated by the BJP. The BJP never treated him with disdain even after it had become apparent that he was losing grip over his own small party," BJP Bihar unit vice-president Samrat Chaudhary said in Patna.

"Despite having only three MPs, including himself, he was given a ministerial berth. His party underwent a crisis two years ago when he had to suspend one of his fellow MPs and one of his two MLAs," Chaudhary said.

Kushwaha also raised the planks of Other Backward Classes (OBC) and social justice -- used by the opposition to decimate the BJP in the Bihar Assembly polls in 2015 -- to target Modi.

He alleged that the Modi-led government was implementing the Rashtriya Swayamsevak Sangh agenda and dubbed it unconstitutional.

Stating that the charge is 'laughable', the BJP said the prime minister belongs to a backward class, President Ram Nath Kovind is a Dalit, while the party's Bihar unit chief is an OBC.

"A postage stamp has also been issued in the name of Jagdeo Prasad, the tallest Kushwaha Bihar has known," said Chaudhary, who himself belongs to the Kushwaha community.

The RLSP president has been upset since the BJP made it clear that it will not be given more than two Lok Sabha seats in 2019 against the three it had fought in 2014.

The party has two MPs and two MLAs.

After that announcement, Chaudhury said, Shah had called up Kushwaha, asking him to meet but he did not do it at that time and sought an appointment when the party president was busy with electioneering in five states.

The NDA won 31 of 40 Lok Sabha seats in Bihar in 2014 and has now been bolstered by the presence of Nitish Kumar's Janata Dal-United, which fought against it in the last polls.

Kushwaha has long had a bitter equation with Bihar Chief Minister Nitish Kumar.

In the 2015 assembly polls, he was given 23 seats and 'if he returned with a dismal tally of only two, it cannot be blamed on the BJP', Chaudhary said.

Opposition parties believe political winds are no longer as favourable to the BJP as they were in 2014 due to 'anti-incumbency' against both Modi and Kumar and are hoping that Kushwaha's exit further weakens the state's ruling alliance.

"It (NDA) won't be able to open its account in the state this time," Kushwaha claimed.

At a press conference, he said people like him were attracted to Modi in 2014 due to his OBC background and hoped that he would deliver on the agenda of social justice.

"People believed 'achche din' will come. It did not happen. Bihar remains where it was," he said.

Targeting the Modi government for not releasing the census data of the OBCs, he said there is fear and confusion among the backward classes.

'The government has been toeing the agenda of the RSS which is unconstitutional and is neglecting and subverting the agenda of social justice enshrined in the Constitution for which we have supported the NDA,' he said in his resignation letter.

Attacking Modi, he said the Union Cabinet has been reduced to a mere rubber stamp, simply endorsing the prime minister's decision without any deliberation.

'Ministers and officers posted in ministries have become figureheads as virtually all decisions are taken by you, your and the BJP president. Which is unconstitutional,' his letter added.

'The promise of providing Bihar with a special package has been the biggest jumla (rhetoric),' Kushwaha said.

On his future move, he said he is open to joining the opposition's camp and also launching a third front. Kushwaha was joined by his party MP Ram Kumar Sharma but his announcement triggered dissent within his own party.

Both his MLAs Lalan Paswan and Sudhanshu Shekhar made it clear that they would remain in the NDA and the former even claimed: "We are the real RLSP."

RLSP national vice-president Bhagwan Singh Kushwaha also expressed his disapproval of the decision, saying, "Kushwahas have traditionally been voters of the NDA. The decision will not go down well with them."

Kushwaha accused the BJP and the JD-U of doing everything to weaken his party and alleged that inducements have been used to win over the MLAs.

He also said that he would contest the 2019 Lok Sabha polls from Karakat, from where he had won in 2014.

On the issue of building a Ram temple in Ayodhya, he said it is not the job of a political party to build religious places.

"Kushwahas believe themselves to be of Kush, one of the twin sons of Lord Rama," Chaudhary remarked.