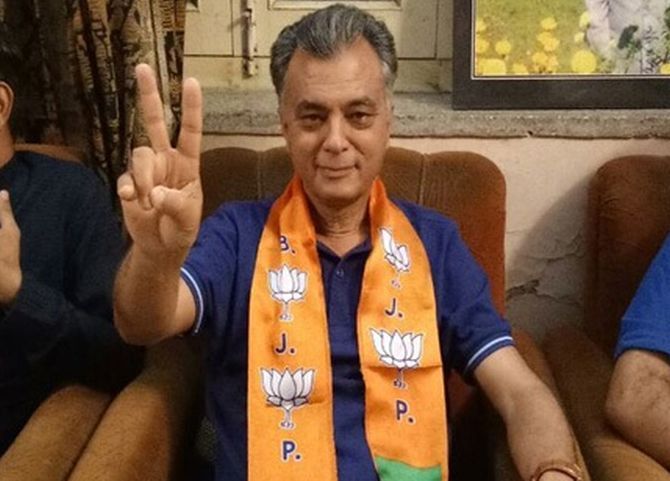 Himachal Pradesh Power Minister Anil Sharma resigned from the Bharatiya Janata Party government on Friday, days after the Congress fielded his son Aashray Sharma as its candidate from the Mandi Lok Sabha constituency.

Anil Sharma has been under pressure from the Bharatiya Janata Party after his father, former Union minister Sukh Ram, quit the saffron party and joined the Congress along with Aashray Sharma last month.

"I have resigned from the ministry as during a public meeting in my Assembly segment Mandi yesterday, the CM said 'my minister is lost somewhere, if someone is aware about his whereabouts, let me know'," Anil Sharma told PTI.

Sharma said Jai Ram Thakur's sarcastic comments forced him to resign from the ministry, saying it indicated that the chief minister had lost faith in him.

"If the CM loses his faith in a minister, there are only two options: either the CM should expel him from the ministry or the minister himself should resign. So, I thought it better to resign from the ministry," he said.

"Anil Sharma should have resigned on moral grounds from the ministry earlier as contrary to his statement. He was secretly campaigning for the Congress. He was calling people in his house and was asking them to work for the Congress," the chief minister told reporters in Mandi later in the day.

"After getting his resignation, I talked to national BJP president Amit Shah and other senior leadership and, as per their instructions, I happily accept Anil Sharma's resignation," he added.

Sharma, who had joined the BJP right before the 2017 assembly election after quitting the Congress, clarified that though he had resigned from the ministry, he remains with the saffron party.

Thakur said technically Anil Sharma was still in the BJP. But, the chief minister added, if he campaigns for the Congress, his membership from the assembly would be ended under the anti-defection law.

Congress legislative party leader Mukesh Agnihotri claimed Anil Sharma's resignation would have an adverse impact on the ruling party not only in Mandi, but also in the state's other three Lok Sabha seats of Hamirpur, Kangra and Shimla.

Agnihotri also asked Anil Sharma to campaign for Congress candidates after his resignation from the ministry.

But Anil Sharma said he would neither campaign for his son nor Ram Swaroop Sharma. "My blessings are with my son Aashray. It is up to the electors whom they will vote for victory."

At the same time, he added, if Ram Swaroop Sharma had done work in Mandi, then the parliamentarian should ask votes on that instead of taking the help of the chief minister.

The MLA said the voters of the Mandi assembly had elected him as a BJP candidate. "So, I will not resign as the MLA and from the party. I will remain as the BJP MLA and will try to get the works of my assembly segment done from the government."

Showing some messages on his mobile phone to PTI, Anil Sharma claimed: "Bollywood star Salman Khan has asked me to remain as an HP minister. Salman said he will talk to (senior BJP leadership). However, I asked him 'if you have been in my place, what decision would you have taken, in support of your family or not?"

At this, Salman Khan, whose sister Arpita Khan is married to Anil Sharma's elder son Aayush Sharma, said he would have supported his family, Anil Sharma claimed.

The BJP leader, who was camping in Shimla for the past few days, said he would leave for Mandi on Friday itself.

Being Jai Ram Thakur's home district, Mandi seat has become a prestige issue for the chief minister. On the other hand, Sukh Ram's prestige is also at stake and he is leaving no stone unturned to ensure his grandson's victory.